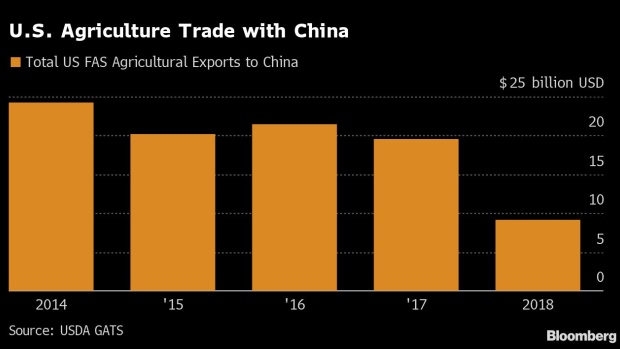 (Bloomberg) -- With the partial agreement with China that he announced Friday, President Donald Trump is back in dealmaker mode after months of escalation.

That doesn’t mean, though, that the new grand bargain that Trump once promised with China is any more than a small step closer to reality, or that a curtain is being drawn on the uncertainty his trade wars have brought to the global economy.

It also leaves a gnawing question hanging over Trump and the economic fallout from his assault on China and global supply chains as he prepares to face the electorate in 2020: Has it really all been worth it?

The surge in Chinese purchases of U.S. farm products that is the biggest win for Trump in the agreement unveiled Friday is one that was first offered by Beijing more than two years ago. It will be accompanied by unspecified commitments on intellectual property and currency and will go some way to repairing the damage done to U.S. agriculture since tit-for-tat tariffs began more than 18 months ago.

Together, the package will calm markets and reduce fears of looming trade-driven recessions in the U.S. and global economies, even if Trump said Friday the two sides had yet to commit a deal to paper that he expects he and China’s Xi Jinping will sign in Chile a month from now.

“There’s nothing bigger than what we are doing with China,” Trump told reporters Friday.

But even if it gels in the way that Trump outlined Friday, the agreement is far smaller in scope than what the president himself once envisioned, or what was on the table when talks broke down in May.

It also leaves major questions hanging in the wind amid a broader relationship showing plenty of signs of souring -- ranging from the Chinese furor over an NBA executive’s backing for the growing protests in Hong Kong to the administration’s invocation for the first time this week of human rights to crack down on Chinese tech companies and visas for officials.

“This deal hardly resolves any of the major underlying sources of trade and economic frictions between the two countries,” said Eswar Prasad, a former head of the International Monetary Fund’s China team now at Cornell University.

“There’s justified skepticism about whether even a mini-deal will get done. Officials said it will take three to five weeks to finalize the details. Past negotiations have broken down in less time than that.”

The contours of the deal unveiled Friday look very similar to ones negotiated by Treasury Secretary Steven Mnuchin and even Commerce Secretary Wilbur Ross that were rejected by Trump over the past two years, said Wendy Cutler, a longtime former U.S. trade negotiator who now heads the Asia Society Policy Institute.

“It looks more like a ‘light’ deal than a ‘substantial’ deal,” Cutler said, and remains at risk of being weakened further as negotiators put it down on paper in the weeks to come.

After months of escalation, Trump compromised this week and offered a tacit embrace of something he has resisted for months: A partial deal that might yet grow into something more comprehensive but could take as many as three separate phases of negotiations.

“Doing it in sections and phases I think is, really, better,” Trump said Friday, after as recently as last week saying he would agree only to a big deal.

That change in strategy reflects a reality that many analysts have warned of from the beginning of Trump’s attack on China. While Trump has steadily increased pressure on China with his tariffs, the Chinese have always been reluctant to embrace the wholesale economic changes Trump has demanded.

“There is still a yawning gap that separates the two sides on core structural issues,” said Prasad.

Perhaps most importantly, the deal unveiled Friday does not include the game changer the Trump administration once promised would be a foundation of any deal with China: an enforcement mechanism to make sure that Beijing does not renege on its commitments. Trump would offer only that it would be worked out later.

It was quickly noticed on Capitol Hill. “After so much has been sacrificed, Americans will settle for nothing less than a full, enforceable and fair deal with China,” said Chuck Grassley, the Iowa Republican who is the party’s leading voice on trade in the Senate.

Also set aside are many of the hardest issues confronting the two economies, including longstanding U.S. complaints about Chinese industrial policy and the government subsidies ranging from cheap electricity to low-interest loans that have fueled China’s economic rise.

It will keep in place the U.S. tariffs on some $360 billion in imports that have disrupted global supply chains and leave, at least for the time being, a threat for more to come in December. Trump seemed to hint on Friday that he may be willing not to go ahead with those tariffs, which would hit popular consumer items like smartphones, laptops and toys and are quietly opposed by some of his own advisers, who fear they could deepen a slowdown in the U.S. economy going into the 2020 election.

“I’m skeptical that there is anything that could be objectively called a deal,” said Scott Kennedy, an expert on the U.S.-China economic relationship at the Center for Strategic and International Studies in Washington. “It appears that the U.S. was looking to find a way to avoid raising tariffs in the next couple months and reassure financial markets, and so it was willing to accept only an oral agreement on a narrow range of issues to take this step. Xi Jinping has to be quite satisfied with this outcome.”

Just what the Chinese have agreed to on intellectual property -- the issue central to the “Section 301” investigation used to justify Trump’s tariffs -- was unclear. The main complaints contained in the original report centered on strategies ranging from cyberattacks to joint venture requirements that China uses to unfairly obtain U.S. technology.

On the issue of currency manipulation, another longstanding U.S. complaint, Mnuchin on Friday said only that there had been new commitments on transparency and that the U.S. was willing to review its August designation of China as a currency manipulator.

People close to the talks say the currency deal, first hashed out earlier this year, closely emulates the commitments to adhere to market-determined exchange rates contained in Trump’s renegotiated Nafta, though those allow a dispute resolution process that the China agreement does not yet contain. Critics have already dubbed even the new Nafta provisions toothless.

For all of its shortcomings the deal unveiled Friday does have two major things to offer: A potential political victory for Trump and the sort of change of tone that many of his fellow world leaders have been hankering for.

“Today was a big win for the president,” said Stephen Vaughn, a partner at law firm King & Spalding who until earlier this year served as the right-hand man of Trump’s trade czar, Robert Lighthizer. “Once again, we see that the United States has enormous leverage in trade negotiations -- when we choose to use it.”

Even a temporary peace may also have broader benefits.

“This won’t revolutionize the U.S.-China relationship or the terms of trade between us, but it shows that the two countries can work together on an important issue,” said Clete Willems, a former economic adviser to Trump who is now at law firm Akin Gump. “Learning to do so is critical to avoid a broad deterioration of all aspects of our relationship, which is not in anyone’s long term interest.”

To contact the editors responsible for this story: Simon Kennedy at skennedy4@bloomberg.net, Sarah McGregor, Robert Jameson