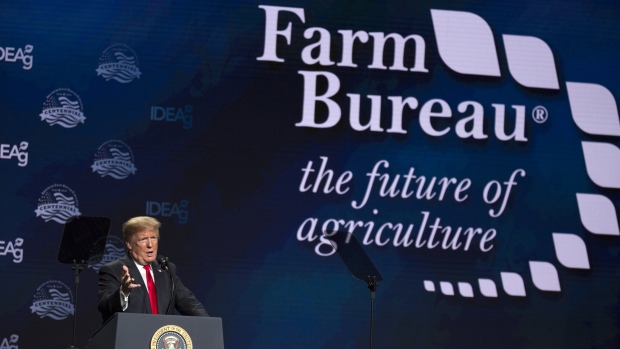 A Deere & Co. John Deere 9560 combine harvester is used to harvest soft red winter (SRW) wheat in the village of Kirkland in Dekalb, Illinois, U.S., on Monday, July 9, 2018. The U.S. government is making a historical switch to the way it distributes its most critical crop data. The U.S. Department of Agriculture will no longer give journalists advance access to its World Agricultural Supply and Demand Estimates (WASDE) publication, ending a decades-old policy. Photographer: Daniel Acker/Bloomberg , Bloomberg

(Bloomberg) -- Bill Flory sends about a quarter of the wheat he grows in Idaho to Japan, a country so key to the fourth-generation farmer that he’s visited there three times in five years.

Now he’s worried. While Canada, Australia and the European Union have all recently secured new or adjusted trade deals with Japan, the U.S. has not. That could give rivals an edge on prices with a customer that regularly imports about $14 billion a year in U.S. agriculture and farm-related products.

Flory, who supports President Donald Trump politically, said he believes the U.S. will eventually finalize a deal with Japan, but he’s concerned about the interim. Meanwhile, the Trump administration instead appears laser focused on trade talks with China, risking the 50 percent market share now controlled by American wheat supplies in Japan.

"How much market share will we lose until these trade issues are settled?” Flory asked. “My biggest fear is we lose market share not because of quality, but because of a lack of trade negotiations being settled."

While Trump and Japanese Prime Minister Shinzo Abe have long signaled the intention to reach a trade deal, the administration has been engulfed in negotiating with China before a March 1 deadline, which could trigger a new increase in tariffs.

"Our competitive position is right now starting to be whittled away and we need to address that with all deliberate speed," said Tom Halverson, chief executive officer of CoBank, a $125 billion lender to the agriculture industry. "We have built up our market share in Japan over decades. It would be profoundly unhelpful to the rural economy and to the agricultural economy to see those relationships and that market access to start to atrophy."

At the U.S. Department of Agriculture’s annual outlook forum in Arlington, Virginia, on Thursday, Gregg Doud, the chief agricultural negotiator for the Office of the U.S. Trade Representative, said the U.S. needs to make a trade pact with Japan an “extraordinary” priority.

Here are a few of the most impacted markets:

As of April 1, grain shipped by American farmers will face a disadvantage of $14 a metric ton to Australia and Canada, a gap that will grow to $70 a ton after nine years, said Vince Peterson, president of U.S. Wheat Associates. By then, he said, "most of the market will be long gone."

"Japanese food processors are looking for ways to reduce their exposure to U.S. wheat right now," Peterson said at a Dec. 10 hearing by the U.S. Trade Representative. "They will reformulate products to adapt to wheat from different origins."

The price disadvantage means Japanese millers are expected to cut average annual imports of U.S. western white, dark northern spring and hard red winter wheat by more than half to 1.35 million tons or less, the National Feed and Grain Association said in its Nov. 26 feedback to USTR.

Japan is the top market for American beef, with the U.S. enjoying a 48 percent market share. While a previous agreement already gave Australian beef an advantage, that will widen even further. It’s a "huge roadblock," said Don Close, a senior analyst of animal protein at Rabobank. Canada is also looking to gain market share.

American pork exporters will also see more competition, especially from the EU. The U.S. was the top supplier of pork to Japan in 2018. But with the new trade agreements implemented and the absence of a U.S. deal by April 1, American export losses would amount to more than $600 million by 2023 and $1.06 billion by 2028, the U.S. Meat Export Federation estimates.

"It is critically important that the U.S. get that long-term agreement with Japan," Close said. "I think a lot of the heavy lifting with those negotiations has already been done, it’s just that we’re so occupied with China and all of these other fracases, that they haven’t had time to ‘okay let’s sit down and get this done’."

Japan is the fourth-biggest market for American dairy and the industry stands to lose $5.4 billion in the 21 years through 2038, the U.S. Dairy Export Council estimates. By 2027, almost half of American shipments to Japan will have been replaced without an agreement.

The cheese market would feel the "most significant overall impact," according to the lobby group, which estimates the U.S.’s market share in Japan could grow to 24 percent by 2027 from 13 percent a decade earlier.

“Beef has been hurt, and pork has been hurt, wheat has been hurt," said former Agriculture Secretary Tom Vilsack, who now heads the Dairy Export Council. It’s the responsibility of the administration "not to forget about agriculture generally, and dairy specifically, because the losses can mount pretty quickly at a time when prices are low.”

To contact the editors responsible for this story: Tina Davis at tinadavis@bloomberg.net, Reg Gale, Millie Munshi