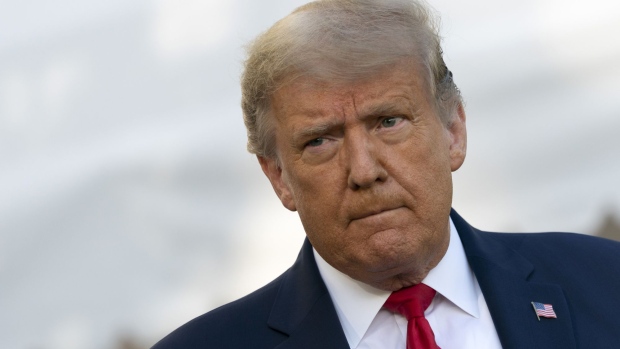 (Bloomberg) -- A New York jury’s guilty verdict for two of Donald Trump’s companies on criminal tax fraud charges marked the latest blow to the former president, as he has watched his potential legal exposure grow since he left the White House.

Trump wasn’t a defendant in the trial of his eponymous business, but the jury heard arguments about what prosecutors described as his role in the scheme. Manhattan District Attorney Alvin Bragg’s investigation of Trump continues; Bragg recently added a former senior Justice Department official to the team. If New York prosecutors press charges before Trump gets another shot at the White House in 2024, he may not be able to claim the presidency as a shield.

Those weakened post-presidency legal defenses have factored into a string of setbacks in court. Trump has leaned into his status as a former officeholder, political figure and, most recently, presidential candidate to attack the investigations swirling around him. But these arguments have largely failed in court and don’t provide the same level of protection he enjoyed as the top US executive.

His position as president offered a powerful barrier against prosecution during former special counsel Robert Mueller’s investigation of Russian interference in the 2016 election and whether Trump engaged in obstruction. Mueller would later explain that his office didn’t reach a conclusion about whether Trump committed crimes because charges simply weren’t an option – longstanding Justice Department policy didn’t allow prosecuting a sitting president.

The latest special counsel to explore Trump’s conduct is operating in a different environment. Jack Smith was appointed by Attorney General Merrick Garland last month to oversee investigations of the handling of government records at Trump’s Mar-a-Lago home and the events surrounding the January 2021 attack on the US Capitol.

Any decision to charge Trump would still be politically explosive and legally fraught. Depending on the timing, the Mar-a-Lago and Jan. 6 probes could run into separate Justice Department policies that counsel against actions that might be seen as interfering in an election.

But as long as Trump is a private citizen, it’s no longer a given that federal charges are off the table.

A Trump spokesperson didn’t immediately respond to a request for comment on Trump’s ongoing legal liability. Lawyers for the two convicted Trump companies have said they will appeal the verdict.

The New York attorney general’s $250 million civil fraud suit against the former president and the Trump Organization will go to a jury in October 2023. The state has alleged a long-running scheme to manipulate the value of real estate assets to deceive banks and insurers.

Trump has been able to delay some investigations through court challenges to subpoenas, other document demands and the seizure of materials from his Florida home. But when judges have reached the point of handing down rulings, he has often lost.

Earlier this month, a federal appeals court tossed out a monthslong fight over the fate of the Mar-a-Lago records. Trump’s lawyer insisted that he wasn’t asking for special treatment but still urged the court to consider the unusual circumstances and political context of the case.

The 11th US Circuit Court of Appeals panel, which included two of Trump’s own nominees to the court, was unpersuaded, ordering an end to a review by an outside special master that had kept the records out of the criminal probe.

“To create a special exception here would defy our Nation’s foundational principle that our law applies ‘to all, without regard to numbers, wealth, or rank,’” the judges wrote.

The US Supreme Court sided with the Justice Department in the Mar-a-Lago case in excluding records with classified markings from the special master’s work.

Trump failed to convince the high court to block several investigative bodies from getting his records. Last year, the justices rebuffed his effort to stop the Manhattan district attorney’s office from getting his tax returns.

In January, the court cleared the way for the congressional committee exploring the Jan. 6 attack to get White House records that Trump maintained should be covered by executive privilege.

Most recently, Trump tried to invoke his former office in arguing to stop the IRS from turning over his federal tax returns to a House committee. He lost that fight in November.

One of the few areas where Trump continues to get support from the Justice Department is in his defense against a case brought by the writer E. Jean Carroll. Carroll alleged Trump defamed her when he denied her claims that he raped her in a department store dressing room decades ago. Trump argued he was acting within the bounds of his official duties when he publicly addressed Carroll’s accusation in 2019 and couldn’t be sued.

The Justice Department backed that position when Trump was in office and then under Biden. A Manhattan federal judge rejected the theory, but an appeals court revived the fight, which is now before a DC court. Carroll’s defamation suit is set to go to trial in April. The New York judge hasn’t yet decided on Carroll’s request to merge that case with a new civil battery suit that includes a fresh claim of defamation.

In a host of other pending civil cases against Trump, he’s on his own. Those include efforts to hold him liable for the violence at the Capitol and disruption of Congress during the Jan. 6 attack; civil rights claims related to his efforts to undermine the 2020 election results; and a long-running investor fraud case against Trump and his company.