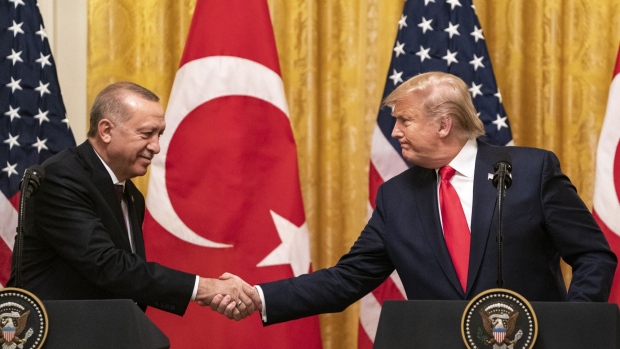 The relationship between Erdogan, president of NATO’s most troublesome member, and Trump will be at center stage during the summit. The alliance’s most pressing concern is Erdogan’s cultivation of ties to Russia and his military offensive against Syrian Kurds, an incursion that began after the U.S. president cleared the way by withdrawing American forces.

Senior administration officials in the U.S. say the two leaders aren’t planning a formal sit-down simply because the Turkish president recently visited Washington. But they acknowledged deepening frustration with the Ankara government, which is pushing forward with the deployment of a Russian-made air-defense system despite U.S. and North Atlantic Treaty Organization admonitions.

The dust-ups over Syria and the Russian weaponry are only the latest high-stakes foreign policy episodes in which Trump has left allies alarmed by an approach to Erdogan that they regard as accommodating to the point of complicity.

At the Turkish leader’s behest, Trump has explored taking action against a Turkish cleric living in Pennsylvania and has asked aides to examine the impact of U.S. sanctions against a Turkish bank accused of money laundering and fraud. Some Republican lawmakers have groused that the Trump administration did little to punish Turkey after members of Erdogan’s security team attacked protesters during his May 2017 visit to Washington.

“You have the bureaucracy, Congress, foreign policy establishment completely mad at the Turks, but you have a president who does everything the Turks want him to,” said Henri Barkey, a professor of international relations at Lehigh University.

And while Congress is moving to sanction Turkey for deploying the Russian anti-aircraft missile, the S-400, Trump has expressed little appetite for penalizing the country and has instead blamed his predecessor, Barack Obama, for pushing Erdogan toward Moscow.

Turkish officials say the threat of U.S. sanctions won’t stop Ankara from fully deploying the Russian air-defense system, scheduled to be completed in the first half of 2020. That said, the country’s economy is ill-prepared to withstand U.S. economic retaliation. Last year, a diplomatic dispute with Washington accelerated a selloff in the nation’s currency, tipping the economy into its first recession in a decade.

Heightened fears of U.S. sanctions related to the S-400 purchase have taken a toll on confidence, hurting the fragile economic recovery.

The Senate Foreign Relations Committee is expected to consider legislation next week sanctioning Turkey for both the Syria incursion and the S-400 purchase. Senators Chris Van Hollen, a Maryland Democrat, and Lindsey Graham, a South Carolina Republican and Trump confidant, wrote to Secretary of State Michael Pompeo on Monday demanding that the State Department sanction Turkey for the S-400 deployment under current law.

“The time for patience has long expired,” the two senators said. “It is time you applied the law. Failure to do so is sending a terrible signal to other countries that they can flout U.S. laws without consequence.”

Trump can little afford further controversy over his conduct of foreign policy with impeachment hearings underway in the House. The danger is particularly acute with Turkey: The president’s personal lawyer, Rudy Giuliani, who is a central figure in the impeachment inquiry, once lobbied the White House to reduce sanctions against Halkbank, the Turkish-owned bank accused of running an operation to dodge sanctions against Iran.

Giuliani also sought the extradition of Turkish cleric Fethullah Gulen, a Pennsylvania resident who was an Erdogan ally until the two men had a falling out. Edogan blames him for an attempted coup in 2016.

Trump has forged a bond with Erdogan even though the Turkish leader has occasionally caused him public discomfort. During his visit to Washington last month, for example, Erdogan announced to reporters that he had personally returned a letter Trump wrote him warning against the Syria incursion. Trump didn’t acknowledge the insult.

If he is seen cozying up to Erdogan again at the NATO summit, Trump may invite more scrutiny from the very Republican lawmakers he’ll need on his side as the impeachment process continues.

The White House still sees value in direct engagement with Turkey, according to a senior administration official who requested anonymity to discuss the U.S. diplomatic approach to the summit. Officials believe that the NATO alliance is stronger with Turkey’s cooperation, and that engagement can pay dividends as they work through tough issues and seek to hold Ankara to its commitments.

But the shortcomings of the approach are apparent. Erdogan so far appears undeterred by American efforts to persuade him to abandon the S-400, perhaps because of Trump’s own equivocation on the matter.

Foreign policy specialists say Erdogan’s decision to go forward with the program may be rooted in a calculation that he can either wring more concessions from the U.S., or that Trump is unwilling to enforce sanctions.

“There were a lot of carrots offered to Turkey – a free trade pact, Patriot missiles, the F-35 – but he didn’t budge,” said Omer Taspinar, a senior fellow at the Brookings Institution. “He went back to Turkey and declared the decision on the S-400 was irreversible.”

Speculation that Trump is unwilling to confront Erdogan is fed by apparent White House pressure on Republican lawmakers to avoid antagonizing Ankara.

Senate Republican leaders declined to take up a House-passed bill that would more quickly impose sanctions on Turkey. And the same day Erdogan met with Trump and Republican senators in November, Graham blocked the Senate from adopting a House-passed measure characterizing the Ottoman Empire’s killing of 1.5 million Armenians in the early 20th century as genocide.

Graham told the news service Axios that the White House asked him to block the bill.

Concerns over the president’s approach have only deepened in the aftermath of the Turkish campaign in Syria. Critics say a cease-fire agreement brokered by U.S. Vice President Mike Pence came at the expense of Kurdish fighters who helped NATO allies defeat Islamic State and strengthened the Russian position in Syria.

Erdogan is scheduled to meet with the leaders of the U.K., Germany and France on Tuesday to discuss developments in Syria, where he seeks to establish what he calls a “safe zone” free of Kurdish militants. Without making explicit accusations, Turkey on Monday demanded its allies do more to satisfy its concerns in Syria.

“In return for its commitment and contributions to NATO, Turkey expects a common security strategy that actively supports our security concerns,” Erdogan’s communications director Fahrettin Altun said in a Twitter post. “A failure to adequately acknowledge the legitimate threat perceptions and security concerns of member states will weaken the alliance and make NATO less credible.”

Erdogan has said that during the NATO summit, he will propose a donor conference to facilitate the return of Syrian refugees to a safe zone he claims his military has established in the region vacated by the Kurds -- an indication that he’s looking to make his gains in the country permanent.

A Turkish official said last week that the country is at the same time opposing a NATO defense plan for the Baltics and Poland because the U.S. has blocked a plan to label the Syrian Kurdish militia YPG as a threat.

Trump may be tempted to back the Turkish effort, particularly since he’s described the cease-fire as an example of his unconventional diplomacy paying dividends. But the president’s opponents appear wary, and Trump may ultimately conclude that it’s not worth further tying himself to Erdogan.

--With assistance from Onur Ant.

To contact the reporter on this story: Justin Sink in Washington at jsink1@bloomberg.net

To contact the editors responsible for this story: Alex Wayne at awayne3@bloomberg.net, Justin Blum, John Harney