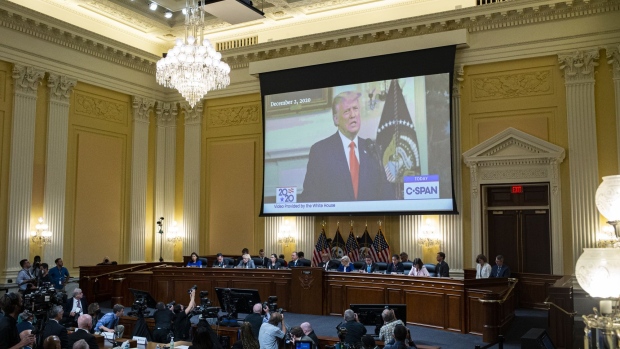 Former US President Donald Trump displayed on a screen during a hearing of the Select Committee to Investigate the January 6th Attack on the US Capitol in Washington, D.C., US, on Tuesday, June 21, 2022. The committee investigating the Jan. 6, 2021 insurrection at the US Capitol is set to outline aggressive efforts by former President Donald Trump and his allies to pressure state officials to help overturn Joe Biden's 2022 election. , Bloomberg

(Bloomberg) -- The House committee investigating the 2021 insurrection at the US Capitol will focus on Donald Trump’s attempts to pressure top Justice Department officials to bolster his claims of election fraud in battleground states that Joe Biden won.

Committee Chairman Bennie Thompson said the hearing will show that several of Trump’s Justice Department officials refused to participate in “the Big Lie” being pushed by the president and his allies about the election being stolen.

Trump’s efforts culminated in a Jan. 3 confrontation in the Oval Office when the president backed off a plan to fire acting attorney general Jeff Rosen and install a more willing replacement only after threats of a mass resignation, according a Senate report based on testimony from participants.

Rosen is among the witnesses scheduled to testify at the 3 p.m hearing, along with Richard Donoghue, then the acting deputy attorney general and Steven Engel, then the assistant attorney general in charge of the department’s Office of Legal Counsel. All three were present at the Jan. 3 meeting.

“Some argued to the former president and public that the election was corrupt and stolen,” Rosen plans to tell the committee in his opening statement. “That view was wrong then and it is wrong today, and I hope our presence here today helps reaffirm that fact.”

Networks covering the hearing live include CNN and MSNBC. Here are some key aspects to watch for.

Showdown in the Oval Office

Among the most dramatic episodes in the run-up to the Jan. 6 riot was the Sunday evening confrontation in the Oval Office. The hearing will give the public a chance to hear first-hand accounts live on television.

Rosen rushed to the White House after learning Trump planned to replace him with Jeff Clark, an assistant attorney general who normally handled environmental law but enthusiastically embraced Trump’s efforts to get the department to support claims of election fraud.

Clark had been privately meeting with Trump and lobbying Rosen to send letters to battleground state legislatures asserting the department had concerns about election fraud and suggesting they consider alternate electors, according to the Senate report. Rosen told Senate investigators that in the days before the Oval Office meeting, Clark had told him that Trump would let him stay in the post if he sent the letters, which he said he refused to do.

Rosen walked into the Oval Office with commitments from most of the department’s senior leadership to resign if Trump went through with the gambit. White House Counsel Pat Cipollone told Trump the move would be tantamount to “a murder-suicide pact” and threatened to join the Justice Department officials in quitting, according to the report.

Engel played a key role in batting back a plan Trump and his allies urged on the Justice Department -- to take the former president’s false claims of a stolen election directly to the Supreme Court.

A White House assistant emailed a draft brief for the proposed Supreme Court case directly to Rosen and Donoghue on Dec. 29, saying the president had asked her to share it with them, along with Cipollone and White House chief of staff Mark Meadows, according to the Senate report.

Engel prepared a document the next day finding “no legal basis” for the lawsuit.

The panel presented evidence last week that Trump had been told his plan to have Vice President Mike Pence block certification wasn’t legal. His efforts to pressure the Justice Department also may have brushed up against and even transgressed the law.

Republican Liz Cheney, the panel’s vice chair, said the committee has depositions from Justice Department officials saying they told Trump the assertions he wanted in the letters to state legislatures weren’t true because their probes hadn’t found evidence to back up the claims. That raises the possibility that Trump intended to obstruct official proceedings fraudulently, in this case state certification of presidential electors.

Was Clark working with Trump allies?

Will the panel present evidence that Clark worked on the plan to issue the Justice Department statement on election fraud with Perry or anyone else? Will the panel reveal new information about the discussions that Clark had with Trump or any others who were trying to overturn the results of the election?

Did Perry seek a pardon and why?

Cheney said Perry, a Pennsylvania Republican, sought a presidential pardon in the weeks after the Jan. 6 riot. Perry has denied doing so.

Will the panel present evidence Perry requested a pardon? What actions by Perry can the panel connect to the pardon request?

What other members of Congress sought pardons?

Cheney also said “multiple other” Republican lawmakers sought presidential pardons for their roles in trying to overturn the 2020 election. Who are they and what activities can the panel show raised concerns about criminal prosecution?