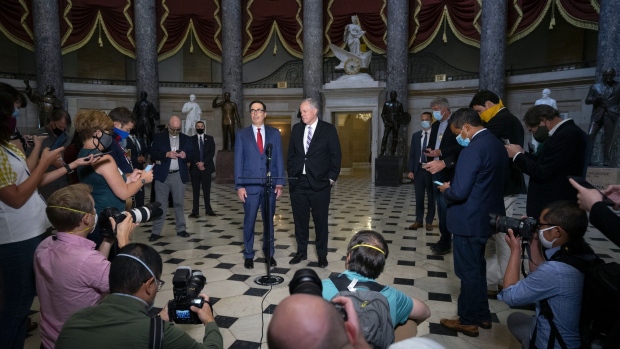 Chuck Schumer listens as Nancy Pelosi speaks following a meeting at the U.S. Capitol in Washington, D.C. on Aug. 7. , Bloomberg

Two days after President Donald Trump moved to implement scaled-down coronavirus relief to prod Congress into action, Republicans and Democrats remained deadlocked over a stimulus plan and gave no indication they were ready to head back into negotiations.

The parties’ Senate leaders illustrated that Monday afternoon, with Mitch McConnell accusing the Democrats of thinking “they have political leverage over the president of the United States” to push for a big package that he said includes non-coronavirus items. His Democratic counterpart Chuck Schumer said “the only way to crush the virus and truly protect American families is to pass a comprehensive bill” and urged Republicans to meet his party halfway.

There are areas where compromise over a massive aid bill is possible and a “fair deal” could be agreed upon, Treasury Secretary Steven Mnuchin said earlier in the day on CNBC. But he continued to dismiss Democrats’ insistence on almost US$1 trillion for aid to state and local governments as “absurd.”

Schumer said he’s hopeful Mnuchin and White House Chief of Staff Mark Meadows will face enough pressure in their party to return to talks that broke up last week, with Senate and House lawmakers leaving Washington with plans to return only if a deal is reached. But he refuted Trump’s claim Sunday that he and House Speaker Nancy Pelosi had reached out to meet with them again and seemed more inclined to compromise.

“No, we didn’t call him,” Schumer said in an interview on MSNBC. “He makes these things up.”

Republicans and Democrats started out more than US$2 trillion apart on overall spending and on a number of key issues -- including how much to transfer to state and local governments, whether to provide virus lawsuit protections for businesses that reopen and how to handle an extension of supplemental unemployment benefits after weekly payments of US$600 stopped last month.

Democrats said they offered to reduce their proposal by US$1 trillion if Republicans raised theirs by a similar amount and were rebuffed.

“We’re not just going to split the difference” between the Democratic proposal -- which totaled $3.5 trillion in a House-passed bill in May -- and the $1 trillion plan Republicans offered at the end of July, Mnuchin said Monday.

The impasse over the size of the measure sets up the potential for weeks more posturing and negotiations that may not yield real progress despite record high unemployment levels. Lawmakers also face a Sept. 30 due date for the annual federal budget -- setting up a hard deadline to agree on a wide array of spending or risk a partial government shutdown just weeks before the election.

Trump took action to divert disaster aid money to allow a temporary bump in unemployment benefits to jobless Americans to as much as US$400 a week, defer payroll tax collections and payments on federal student loans, as well as potential eviction protections.

Questions remained over the implementation of some of the steps, including the unemployment insurance benefits. New York Governor Andrew Cuomo said a requirement to have states shoulder a quarter of the burden of is unaffordable and unworkable. “States have expended a lot of money to deal with Covid,” he said. “They have serious financial issues.”

Democrats and some Republicans -- including Senator Ben Sasse of Nebraska -- said that Trump’s actions are unconstitutional. Pelosi and Schumer, however, haven’t said whether they will challenge them in court. White House press secretary Kayleigh McEnany said the administration still wants funding for schools and direct payments to Americans -- items not included in the executive orders.

The National Governors Association called on Congress to provide for “US$500 billion in unrestricted state aid” from Congress, Cuomo, a Democrat who leads the group, and Vice Chair Arkansas Republican Asa Hutchinson said in a joint statement Monday.

While Republicans have been divided over the stimulus, Democrats have put up a united front.

So far Pelosi isn’t facing calls from Democrats facing re-election campaigns in swing districts to cut a quick deal. New Jersey Representative Tom Malinowski was the lone Democrat to say on a Saturday caucus call that failure could hurt vulnerable members in the November election, according to a person familiar with the matter.

But Malinowksi on Monday said he’s not questioning Pelosi’s strategy. “I’ve made clear to leadership I want them to fight as hard as possible for the best possible agreement. We do need an agreement,” he said.

Meantime, estimates of the impact of Trump’s executive orders have varied, with Goldman Sachs Group Inc. reckoning “something like US$200 billion” in fiscal relief, and JPMorgan Chase & Co. at “less than US$100 billion” in stimulus. JPMorgan economist Michael Feroli said in a note Monday “we continue to believe that Congress will get a deal done.” Goldman analysts including Alec Phillips underscored that legislation “will still be necessary.”

“All policy tools” will be needed to support the American economic recovery, the International Monetary Fund’s executive board said in a statement Monday following an annual consultation with U.S. authorites. “An additional sizable fiscal package would be needed to strengthen health preparedness and sufficiently boost demand, including through increased federal transfers to state and local governments.”