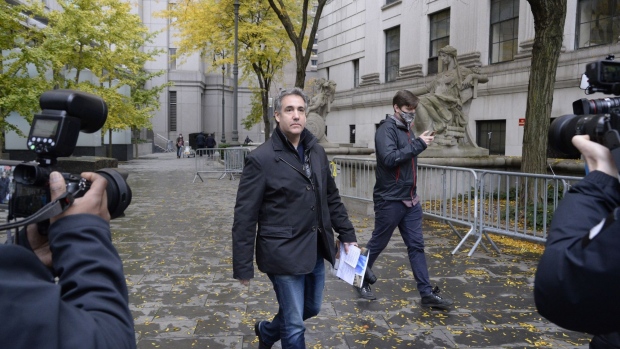 (Bloomberg) -- Michael Cohen, who was sentenced to three years in prison for violating campaign-finance laws for former President Donald Trump as well as bank and tax fraud, criticized New York prosecutors for their leniency with a former colleague at the Trump Organization.

Allen Weisselberg, the longtime chief financial officer at Trump’s company, pleaded guilty to 15 counts related to a yearslong scheme to avoid paying taxes by taking compensation in perks like cars and an apartment. He agreed to the plea on the understanding he’d serve a five-month jail term, which could be cut shorter with good behavior.

In Cohen’s view, Weisselberg fought the charges for too long to warrant a short stint in jail. He also has claimed the CFO misled the government about his knowledge of the infamous hush-money payment Cohen arranged for the adult film star Stormy Daniels before the 2016 election, to avoid implicating himself in a separate case that led to Cohen’s downfall.

“It is counter productive to permit an individual who committed years and years of tax fraud, failed to cooperate or provide any testimony to authorities, lied about information to the SDNY to obtain immunity, burdened the system with a not guilty plea as well as multiple motions for dismissal to receive the benefit of a five-month plea deal,” Cohen said in an interview. “Just another example of disproportionate sentencing.”

“Michael Cohen just wanted to go on TV to complain why he got a three-year prison sentence while my client Allen Weisselberg pleaded guilty to 15 felonies and will only serve 100 days,” Gravante said. “You can tell Cohen it’s because Allen Weisselberg had a better lawyer than he did.”

Cohen, who for years was Trump’s lawyer and fixer, has blamed the former president for his past conduct and said he “emphatically” believes that Weisselberg’s plea is indicative of what happens to professionals in Trump’s orbit.

“Currently, there are more than two dozen people in Trump’s inner circle who have been indicted, incarcerated or facing criminal indictments for actions done at the direction of, or for the benefit of, Donald,” Cohen said.

(Updates with detail on Cohen’s claim about Stormy Daniels payment)