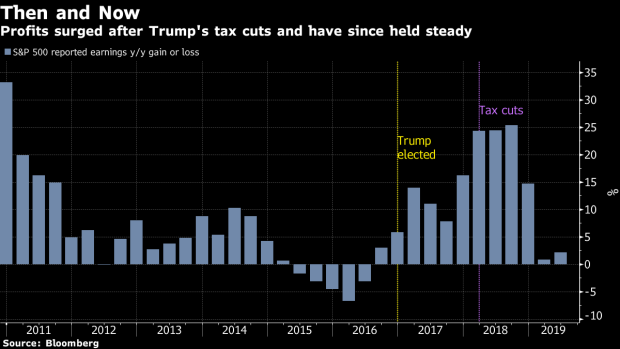 (Bloomberg) -- Companies in the S&P 500 employ tens of millions of people across five dozen industries, scattered in more than 60 countries. They earn $1.5 trillion a year on sales of almost $12.5 trillion. Forcing change on anything so big should be beyond any human. But that hasn’t kept one from trying.

Since the day of his inauguration, Donald Trump has professed to be waging war on the commercial policies of the past, with the implicit goal of buttressing America’s bottom line. And while the president often hoists the stock market as his economic litmus, a more relevant test may be corporate earnings, the nexus of everything from trade to tax to regulatory reform.

Has it worked? While there are a lot of moving parts, a few generalizations can be made. Since he was elected in 2016, annual S&P 500 profits have gone from $116 a share to an estimated $179.30 next year, a target that, if hit, would represent near twice the historical growth rate. When the market soars, as it did on Friday, the 11.5% annual increase implied by those numbers are part of the reason.

“The president has been clear since day one that the country’s economic wealth and that of corporations was something that was going to be a top priority,” said Terry Haines, founder of Pangaea Policy, a policy and political analysis company, and former chief counsel to the House Financial Services Committee. “Generally, the impact’s been very good.”

Whether you see Trump as fearless advocate or glorified confidence man, he is leaving a mark on the fortunes of U.S. companies, from banking and health care to mining and microprocessors. Assessing the impact is a task in sizing up the administration’s legacy -- at least, that is, from an economic standpoint.

Any discussion of the president’s impact on profits begins with the corporate tax overhaul of 2018. S&P 500 earnings forecasts soared in the two months after the president said he’d lower the levy from 35% to 21%, with upward revisions that were four times as fast as any period Bloomberg tracks. Income increased 25% in three of four quarters in 2018, a gain not seen since 2010 when firms were rebounding from the financial crisis.

Of course, you can’t know what would’ve happened if Trump hadn’t been elected -- and critics will debate the costs of his overhaul in terms of wealth equality and budget deficits for years. But by the end of 2018, earnings for U.S. banks ended up rising 7 percentage points more than analysts thought when the year started. Similar excess gains were evident in technology and machinery firms.

Overall, analysts were predicting S&P 500 companies would earn a combined $146.90 a share in 2018 -- while in the event they booked $157.70. An overshoot that big is exceedingly rare. Estimates for periods so far in the future almost always fall.

But while 2018 marked a banner year for corporate profits, it’s been a tough act to follow. This year, forecasts for 2019 earnings growth have done what they almost always do over time, deteriorate. True, they haven’t turned negative, meaning companies could easily reprise last year’s gaudy totals, a feat unto itself. But it’s hard to argue anything Trump has done this year -- certainly not his trade war -- has boosted profits further.

Using the same before-and-after process, 10 months into 2018 -- after analysts had baked the tax cuts into estimates -- Wall Street was calling for the S&P 500 to earn $176.70 for the current year. Fast forward to now -- a period that encompasses most of the president’s tariff war -- and estimates are 8% lower than they were, at $162.90.

So while earnings are still poised to rise 2%, and some weakening in long-term estimates is natural (though not usually this big), it’s fair to say Trump’s overseas entanglements have disappointed those on Wall Street hoping to see another year of bumper growth.

The industries that have weighed on S&P 500 profit estimates the most have been those entangled in the U.S.-China trade war. Of all 11 major equity sectors, energy, materials, information technology, and industrial companies have seen the worst deterioration in earnings forecasts for 2019.

Ten months into 2018, analysts thought profits for the industrial sector would increase 12.5% in 2019. Now, they see a decline of half a percentage point. At that same point last year, Wall Street was forecasting that tech earnings would expand by 14% in 2019. Now, analysts estimate they’ll fall more than 2%, with the change driven by downgrades for trade war-sensitive semiconductor and hardware stocks. Meanwhile, software and services stocks, seen as more insulated from the U.S.-China spat, have maintained forecasts for profit growth above 16%.

Stacy Rasgon, a senior analyst at Bernstein, points to uncertainty caused by the trade war for some of the weakness in chipmaker views. The direct impact is relatively small given the amount of trade in semiconductors between the two nations, he said, but there’s hope that if a trade deal materializes, next year may be better. “You’re starting to price some of that hope in, though the indirect impact is potentially much bigger and very hard to size.”

The S&P 500 gained 1.2% this week, snapping a streak of losses, after the U.S. and China were said to have reached a partial agreement that would form a truce in the trade war.

But even in the face of the trade war, looking back, there’s no denying that corporate profits have surged since President Trump took office. While the last few years have seen twists and turns, and things could change as the election whips up, as of now the S&P 500 has gained 40% since the 2016 election, and the Dow Jones Industrial Average has added 8,670 points.

“There’s a lot to tout in this economy and stock markets are still strong,” said Nela Richardson, investment strategist at Edward Jones. “If things were to persist, that’s a great legacy to stand on.”

--With assistance from Luke Kawa.