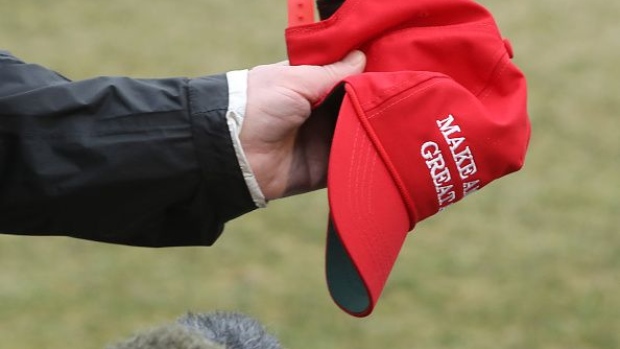 (Bloomberg Opinion) -- Perhaps it’s because I’ve been watching normal politicians this week.  The ones who stretch the truth from time to time but try to remain anchored in something they can defend as accurate — and who usually appear to be thinking about the consequences of what they say. So I just can’t get over what the U.S. president tweeted today:

Boycotting Goodyear? As the Economist’s Jon Fasman put it: “Goodyear is an Akron-based company that employs 64,000 people. Urging a boycott seems an odd strategy for someone who wants to win Ohio.” Of course, thinking of Trump’s actions as part of any serious long-term strategy is futile. He’s a bundle of grievances, impulses and immediate reactions, and usually nothing more.

That doesn’t mean he’s not dangerous, and sometimes his impulses seem like strategic planning. His crusade against the post office may simply be a side effect of his feud with Amazon’s Jeff Bezos. Yet that doesn’t mean that his repeated false claims that voting by mail causes fraud won’t weaken democracy by undermining voters’ confidence in election results.(1)

We could also talk about the ethics of a U.S. president going after a company — an American company in a competitive world market, at that — for supposedly criticizing him. (We won’t even get into whether he did the research to check if the supposed offense wasn’t just some random internet nonsense.)

It’s not quite a violation of the company’s First Amendment rights, but having the president imply that private citizens or businesses should be subject to government-initiated boycotts if they oppose him only emphasizes how little respect he has for democratic norms.

And then there’s “Get better tires for far less!” I don’t know anything about tires, but if Goodyear’s product was really awful and expensive, Trump wouldn’t need to lead a boycott to stop people from buying them. Indeed, normal boycotts do not talk the product down. They focus on the perceived misbehavior of the company.

As I’ve said, Trump doesn’t lie like a politician, using the occasional misleading statement and exaggeration and only rarely getting a fact outright wrong — as can be seen in how Joe Biden has talked about the pandemic. Trump lies like the proverbial used-car dealer, with constant unsupported wild statements that can’t stand up to any mild scrutiny: As long as he makes the sale in the moment, it doesn’t matter what is revealed later on. That’s how he has amassed over “20,000 false or misleading claims,” as the Washington Post’s team of fact-checkers tallied a few weeks ago.

Some whoppers he just repeats over and over, no matter how often and thoroughly they are debunked: that the Barack Obama administration spied on his campaign; that the tax cut he signed was the biggest ever; that a Veterans Administration program enacted during Obama’s presidency was his accomplishment. But the one-off false statement like the one about Goodyear is just as common. He tosses off ridiculous claims at his press conferences all the time. He usually goes in with a prepared statement, and as he reads it he gets distracted and ad-libs some superlative he appears to have made up on the spot — “better tires for far less!”

Consider how that habit applies to Trump’s never-produced healt- care plan. He keeps claiming it will provide much better coverage at much lower costs. It’s not inherently impossible to achieve that goal — in fact, that’s what supporters of the Affordable Care Act hoped to do. But Trump’s typical wording promises far more than the (fairly ambitious!) Obamacare supporters ever used, and, of course, they actually had a plan.

It may seem to go without saying that Trump’s professional reputation is in tatters and his word means nothing. But consider the evidence: Why is he not involved in negotiations over the current pandemic relief and stimulus bill? Everyone knows he can’t be trusted, so negotiating with him is impossible, and the work-around is to negotiate with his representatives and hope they can sell him on whatever they wind up with. (It’s also why Senate Majority Leader Mitch McConnell stays out of the negotiations, because he can’t be sure Trump won’t undercut him.)

It is not clear whether voters will punish him for all of this. But as far as weakening his ability to get anything done as president? That’s all too obvious.

(1) It's impossible at this point to figure out to what extent the recent slowdown in postal deliveries and Trump's position on negotiations for money for the USPS are part of a real plan to derail mail-in votes, or efforts by libertarian opponents of government services to eliminate public goods, or sincere efforts to react to changes as technology changes mail delivery. There's reporting that supports any of these possibilities, so I'm reluctant to draw conclusions.Perhaps upcoming congressional hearings with Postmaster GeneralLouis DeJoy will shed light on it. Trump's statements won't. He's been all over the place. At one point he claimed to be opposing new money for the post office in order to prevent vote-by-mail, but he's also said that he was for that money, and his most frequent wording is somewhere in between and extremely difficult to make any sense of anyway.