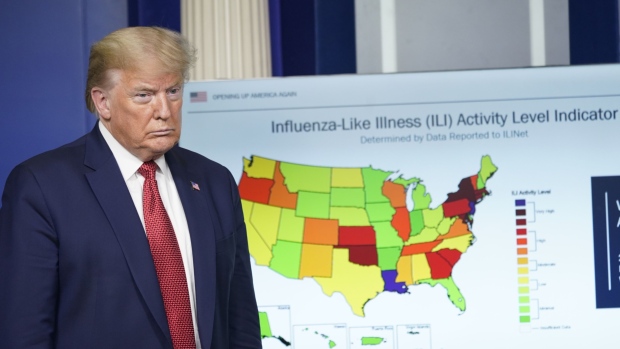 U.S. President Donald Trump attends a news conference at the White House in Washington D.C., U.S. on Thursday, April 16, 2020. Some U.S. states and employers may be able to abandon most social distancing practices to curb the coronavirus outbreak within four weeks under guidelines the Trump administration issued to governors on Thursday. , Chris Kleponis/Polaris/Bloomberg

President Donald Trump unveiled guidelines on reopening the U.S. economy that could allow states and employers to abandon within four weeks most social distancing practices to curb the coronavirus outbreak.

Trump has been eager to return Americans to work and to schools even as the outbreak crests in the U.S., with more than 650,000 cases and more than 31,000 deaths. He briefed governors Thursday on guidelines his administration titled “Opening Up America Again.”

“We can begin the next front in our war,” Trump told reporters at the White House. “We’re opening up our country. We have to do that.”

Trump said some states could start the reopening process “literally tomorrow” but declined to say which ones. He later said 29 states are “in that ballgame -- not for opening -- but be ready to open relatively soon.”

The guidelines recommend that states document a “downward trajectory” in cases of coronavirus and flu-like illnesses for two weeks before beginning a three-phase process to return to near normal work and social life. States should document another two weeks of declining cases before proceeding from one phase to another, the guidelines say, while a “rebound” in case numbers could mean reimposing some or all restrictions.

Schools, daycares and bars shouldn’t reopen before phase two, according to the guidelines, while restaurants, movie theaters and sports venues could open in phase one if they practice “strict social distancing.”

Trump said sports would resume without live audiences and would be produced for television. Live audiences would be allowed to return over time, he said.

“We’re going to build this economy back bigger, better, stronger than ever before,” Trump said.

Deborah Birx, one of the top public-health experts on the White House coronavirus task force, said state leaders will have leeway to decide how quickly to proceed.

“We did not put a timeline on any of the phases,” Birx said. “We want the governors, with the data that they have community by community, to be setting up those timelines.”

The guidelines mark a nearly complete retreat from Trump’s claim earlier this week that he had total authority to order states to reopen the U.S. economy, which has practically collapsed after Americans began isolating themselves last month to avoid infection. Trump’s assertion triggered a sharp backlash from governors who said he was overstepping his constitutional powers.

Instead, Trump’s guidelines place much of the onus for the recovery on governors. The document calls on states to establish “safe and efficient screening and testing sites,” ensure “sentinel surveillance” for the disease and “quickly and independently” supply protective gear, medical equipment and hospital capacity to handle a surge in cases.

While Trump has been urged by business leaders and members of Congress to ensure widespread availability of testing for the virus before attempting to reopen the country, the guidelines the White House issued Thursday are silent on that subject.

Trump said at the White House that an increasing number of tests are available and that there’s an “excess testing capacity.” Business leaders and state officials have raised concerns about shortages of available tests.

“They’re saying the right things here,” Howard Forman, director of the health-care management program in the Yale School of Public Health, said in an interview, though he called the guidelines “vague.”

He added that “implementation is the piece that’s harder to do, because they’re not offering the coordination that’s necessary right now.” The federal government may have to help states source supplies for testing, including swabs and reagents, and coordinate its public health workforce, he said.

There’s also doubt about the count of U.S. cases and deaths from the disease, Forman said, particularly in nursing homes. Trump “has a lot of confidence in numbers that we all know are very, very squishy.”

Trump told reporters Thursday that “our experts say the curve has flattened and the peak in new cases is behind us.” He added that “we believe we will experience far fewer deaths than even the optimistic projection, but there is no such thing as an optimistic projection of death.”

As of 4 p.m. Eastern time Thursday, U.S. cases rose 4.7 per cent from the day before to 648,788, according to data compiled by Johns Hopkins University and Bloomberg News. That was higher than Wednesday’s growth rate of 3.5 per cent but lower than average daily increase of 5.7 per cent over the past week. Deaths increased 14 per cent to 31,590.

New York cases rose 9.8 per cent, spiking higher after the hardest-hit state showed signs of stabilizing in the past week. New York’s cases had risen just 0.5 per cent during the same time period on Wednesday.

If there’s a resurgence in cases, Trump said the guidelines allow for adjustments in procedures to respond to a spike in illnesses. The president said international travel restrictions he imposed remain important to protect Americans.

Under the guidelines, states that can already show a two-week decline in cases of the disease may be able to soon enter the first phase of reopening. It wasn’t immediately clear how many states might be able to show such a decline or would move so fast to reopen. After two weeks of declines, they may be able to enter the second phase, and then the third phase after two more weeks, assuming no setbacks.

Trump told U.S. governors on a conference call Thursday that some states would be able to reopen before May 1, when federal social distancing guidelines are set to expire.

In each phase, social distancing is relaxed until employers can finally resume “unrestricted staffing,” according to the guidelines.

The guidelines recommend that employers develop and implement social distancing practices, temperature checks at workplaces, testing for the virus and increased sanitation and use of disinfection. The guidelines also recommend employers ask “symptomatic” workers to be cleared to return to work by their doctors.

Trump said some governors may want to take more time, conceding that some states are in rough shape, two people familiar with the call said. But he told the governors that the country is heading in the right direction.

Vice President Mike Pence told the governors that 24 per cent of U.S. counties have no reported cases of the disease. He said that the federal guidelines are intended to assist governors with decisions to reopen. They should determine the trajectory of the outbreak in their states before changing stay-at-home orders, he said, and assess hospital capacity and the risk of a resurgence in infections.

Trump told the governors that the bottom line is if their states are ready and have low numbers of cases, then they should get back to normal safely but also fast.

He knocked China, saying that a country he didn’t explicitly name should have told the U.S. more about the disease, and that he isn’t happy about it. The U.S. shouldn’t be in the position it’s in, he said.