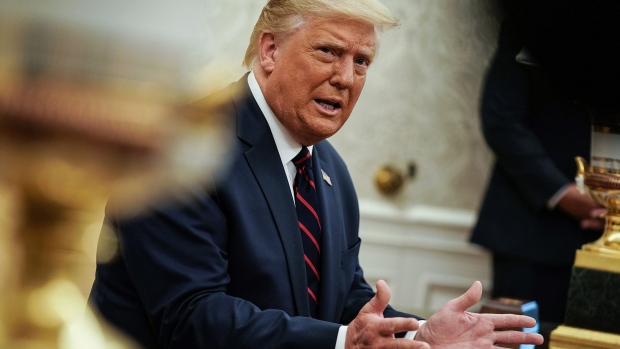 WASHINGTON, DC - AUGUST 20: U.S. President Donald Trump talks to reporters during a meeting with Iraqi Prime Minister Mustafa Al-Kadhimi in the Oval Office at the White House August 20, 2020 in Washington, DC. One day before the meeting, Trump announced that he will allow UN Security Council sanctions to 'snap back' into place against Iran, one of Iraq's neighbors and closest allies, even as U.S. troop levels in Iraq and Syria would most likely shrink in the coming months. (Photo by Anna Moneymaker-Pool/Getty Images) , Photographer: Pool/Getty Images North America

(Bloomberg) -- The U.S. move to “snap back” UN nuclear sanctions on Iran involves legal arcana unlikely to be resolved quickly. What’s clear, however, is that the Trump administration took an approach certain to inflict damage on Iran and relations with America’s allies.

For critics and supporters alike, the disputed U.S. effort to force the restoration of international sanctions on Tehran was peak “America First,” a policy undertaken with little pretense of diplomacy and without regard to the consequences.

They see a conflict between President Donald Trump’s decision to walk away from the nuclear accord crafted during the Obama administration, only to rely on the architecture of that 2015 deal to demand stringent new punishments on Iran. And in response to their rebuke, the U.S. ridiculed its allies for “siding with the ayatollahs.”

“We are seeing how ‘America First’ ultimately means America alone,” said Gerard Araud, a former French ambassador to the U.S. and the United Nations who helped negotiate sanctions on Iran. “They don’t care about their allies. They are burning all the bridges constructed over years of careful diplomacy due to an obsession to kill off the Iran deal.”

For some observers, the U.S. move is a distillation of Trump’s style in another sense: It seeks to blow up a deal without having anything to replace it. They draw parallels to the debate over health care in the U.S., where the Trump team has sought to dismantle the Affordable Care Act without any viable alternative on the horizon.

The move came days before Republicans kick off their convention to renominate Trump for the presidency on Monday. And the timeline of events -- a 30-day window for a United Nations Security Council vote and the October expiration of a UN arms embargo -- means the dispute will be front-and-center during the final weeks of the U.S. election campaign.

European allies expressed shock and disappointment that the U.S. was so willing to be isolated -- first by suffering a humiliating defeat when only one other country, the Dominican Republic, voted with it last week to extend the expiring arms embargo, and then by invoking snapback over almost universal opposition.

The team led by Secretary of State Michael Pompeo is “trying to turn an international agreement and the international system on their heads,” said Ellie Geranmayeh, a senior fellow at the European Council on Foreign Relations. “It’s really nothing short of vandalism on a broad scale.”

That maximalist strategy risks grave consequences. For the last three years, U.S. allies have kept up a public facade that the trans-Atlantic relationship remains strong despite all their disagreements and Trump’s criticism. But that will be harder to maintain now, especially after Pompeo’s crack about siding with the ayatollahs and showing a failure of leadership by refusing to support the U.S.

Opposition to the multinational agreement was a foreign policy rallying cry for Trump, Republicans and some Democrats soon after it was negotiated. They said it lifted sanctions on Iran in the short-term without providing any long-term guarantee that the Islamic Republic wouldn’t seek nuclear weapons. In the meantime, they argued, Iran used fresh investment and cash flows to fuel conflicts from Syria to Yemen.

Fulfilling a campaign promise, the president withdrew the U.S. from the accord in 2018 and began tightening U.S. sanctions on Tehran. The “maximum pressure” strategy had an impact, fueling inflation and undermining domestic support for President Hassan Rouhani’s government And yet, the other nations participating in the accord refused to abandon it altogether. So the U.S. has returned to the UN to argue it still had standing to use its framework to punish Iran.

It’s an argument few others believe. Opposition from China and Russia was expected, but soon after Pompeo made the U.S. position official, the U.K., France and Germany issued a joint statement criticizing the move. It may have been the most direct joint rebuke yet of Trump’s “America First” doctrine.

“France, Germany and the United Kingdom are committed to preserving the processes and institutions which constitute the foundation of multilateralism,” the nations said.

Rebuking the allies, Pompeo said, “America won’t join in this failure of leadership. America will not appease. America will lead.”

Supporters of the strategy argue that it puts the U.S. in position to address some of the key flaws of the original deal -- chiefly that many of its most strict restrictions on Iran expire, or “sunset,” in coming years. Trump has repeatedly predicted that Iran will return to the negotiating table after he wins a second term, a claim officials in Tehran have ruled out.

“If the president wins re-election he’s set up well to address the sunsets and step up maximum pressure and then the regime will be desperate enough to negotiate,” said Richard Goldberg, senior adviser at the Foundation for Defense of Democracies, which has helped guide the Trump administration’s Iran sanctions policies.

Opponents of the U.S. strategy say that while the nuclear accord was imperfect, it was the best available tool to ensure Iran never again sought to develop a nuclear weapon.

Pompeo now insists time is running out on Tehran. He contends that the U.S. notification at the UN starts a 30-day clock that will wind down with the council required to restore sanctions.

Other nations say they will simply ignore the U.S. move, arguing that it means nothing as long as the U.S. continues to renounce the accord. That may also be a calculated bet that Trump will lose in November and that an administration led by Democrat Joe Biden would take a different tack.

Yet the U.S. move this week augurs what could come next should Trump win a second term: a foreign policy built even more on individual transactions rather than a broader sense of mutual gain.

There was a hint of that approach in the Iran debate, when Pompeo visited the Dominican Republic last Sunday to attend the country’s presidential inauguration. The trip followed the Caribbean nation’s decision to cast the lone vote in support of the failed U.S. effort just days earlier to extend the arms embargo on Iran indefinitely.

Critics say that’s an approach historically adopted by China, which has generally shied away from alliances and conducts foreign policy on more transactional terms.

“China’s preferred way of dealing with the world is in bilateral relationships where China is the stronger party,” said Jon Alterman, director of the Middle East Program at the Center for Strategic and International Studies. “The United States has never acted that way until now.”