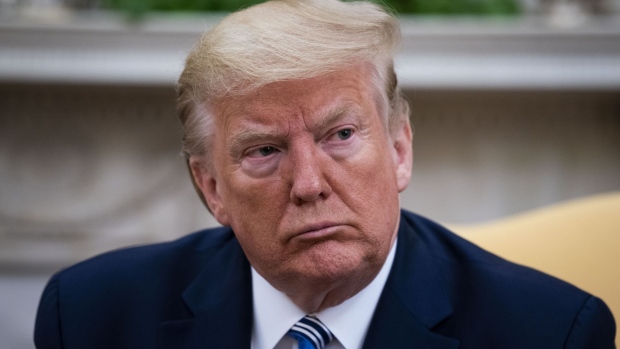 Donald Trump’s latest verbal attack on Sweden has reignited a debate on whether the country’s relaxed approach to fighting Covid-19 is madness or genius.

The U.S. president, who is facing criticism at home for initially playing down the threat of a pandemic, on Thursday sought to direct attention toward developments in Sweden.

“Despite reports to the contrary, Sweden is paying heavily for its decision not to lockdown,” he tweeted.

Despite reports to the contrary, Sweden is paying heavily for its decision not to lockdown. As of today, 2462 people have died there, a much higher number than the neighboring countries of Norway (207), Finland (206) or Denmark (443). The United States made the correct decision!

“The important thing is that you make sure you keep the disease under control so that the health-care system isn’t overloaded, and so far we’ve managed that,” he said, according to a report in Aftonbladet.

But Trump’s latest outburst has once again drawn attention to Sweden’s controversial response to fighting the coronavirus.

The country has left schools, hairdressers, restaurants, gyms and much of the rest of society open. Instead, the government has urged citizens to act responsibly and observe social distancing guidelines. 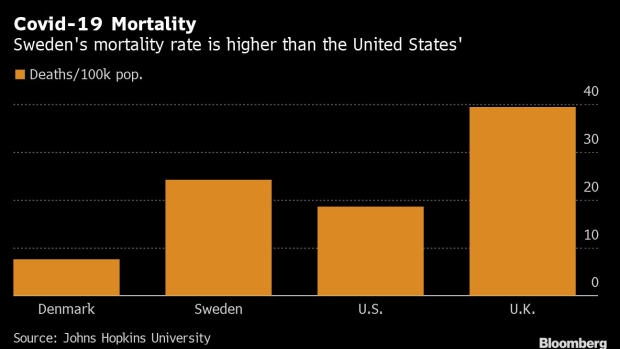 Initially, there was near universal condemnation of Sweden’s decision to avoid a full lockdown. But more recently, opinions have evolved after the country’s top epidemiologist declared the strategy a success amid signs the rate of infections is stabilizing.

Johns Hopkins University data shows Sweden’s death rate is about 24 per 100,000 versus 19 in the U.S. But according to Sweden’s health minister, Lena Hallengren, the data don’t yet tell the full story.

“We’re in different phases, and we’re just, unfortunately, in the beginning of this pandemic. So it’s too early to draw any firm conclusions,” she said in an interview with Bloomberg Television.

Anders Tegnell, the mastermind behind Sweden’s approach, says the idea is to come up with a model that can stay the course, based on an assumption that Covid-19 isn’t going away any time soon.

In a recent interview with Danish state broadcaster DR, Tegnell said, “The long-term sustainability of strict rules isn’t that big. You can only impose such restrictions for a limited time. So you need to find a different way, and our model may prove more sustainable.”

It’s a notion that won the support of the World Health Organization this week.

Michael Ryan, who runs WHO’s health emergencies program, says that “if we are to reach a new normal, in many ways Sweden represents a future model.”

Importantly, Sweden’s laissez-faire approach has at no point resulted in a rate of infections that has overburdened the country’s health-care system, thanks to its universal, state-funded model.

There’s also some confusion as to what the statistics on national death rates actually measure. Swedish authorities say they’ve been meticulous in reporting fatalities in nursing homes, which isn’t the case in some other countries.

On Friday, Sweden reported another 67 Covid-19 deaths, bringing the total to 2,653, according to national data. The number of people infected with the virus is 21,520.

Others have pointed to Sweden’s comparative affluence as an important factor in helping the country deal with the virus. HSBC Global Research economist James Pomeroy notes that more than half of Swedish households are single-person, making social distancing easier to carry out.

More people work from home than anywhere else in Europe, and everyone has access to fast Internet, which helps large chunks of the workforce stay productive away from the office.

Tegnell, the country’s chief epidemiologist, says that “other countries might be able to learn something from Sweden now.”

--With assistance from Frances Schwartzkopff and Charles Daly.