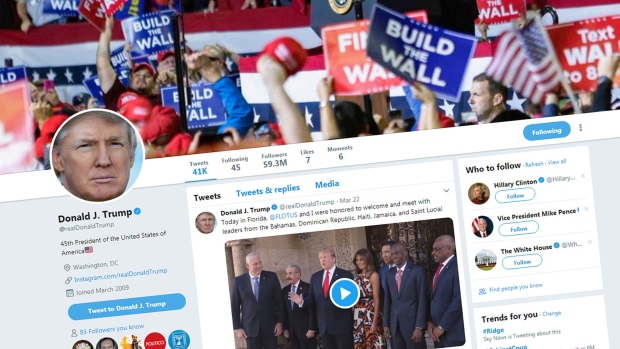 Appeals-court judges voiced some skepticism of Donald Trump’s move to dismiss a lawsuit by Twitter users blocked from following the president, questioning his claim that the account is a personal platform separate from his official role.

The Knight First Amendment Institute at Columbia University sued Trump and White House Social Media Director Dan Scavino in 2017 on behalf of seven users blocked after they criticized the president and his policies. A federal judge in New York last year found that Trump’s account is a public forum and that blocking users violated their constitutional right to free speech.

Trump is now asking a three-judge panel of the U.S. Court of Appeals in Manhattan to reverse that decision and throw out the suit.

On Tuesday, the judges aggressively questioned Jennifer Utrecht, an attorney for the Justice Department. She argued that the account was established long before Trump became president and isn’t a public forum subject to free-speech protection. She said it is more like private residences such as George W. Bush’s ranch in Crawford, Texas, or Trump’s own Mar-a-Lago resort in Florida.

“You have to analyze the conduct at issue, the blocking separate from things that happen elsewhere on that property,” Utrecht said. “Certainly at the White House individual personal actions take place that are not subject to the First Amendment. Similarly, things happen at Mar-a-Lago that might be official actions, but that doesn’t change the fundamental nature, the private nature.”

Judge Barrington Parker described, instead, “an open, robust, national -- worldwide, if you will -- dialogue on matters of transcendent public importance” and said, “What the blocking does, and correct me if I’m wrong, it subtracts from that discussion points of view that the president doesn’t like. Why isn’t that just a quintessential First Amendment violation?”

Utrecht argued that Trump’s Twitter account “is not a forum at all,” but “an account that has been opened up as a platform for his own speech.”

Judge Christopher F. Droney asked whether announcements made through the account, such as the president’s recent comments on North Korean sanctions and his decision to pick Stephen Moore for an open seat on the board of the Federal Reserve, aren’t official actions that would make the account an arm of the federal government.

Utrecht said that while some of the tweets are official government statements, the president “does many things in his personal capacity.”

The lawsuit will help further define how officials and governments can use social media to communicate with the public as use of the networks become more widespread. While courts from California to Florida have mostly ruled that politicians can’t block critics on official accounts, the case is the first involving the president’s Twitter feed, which he has used for a decade for nearly-daily commentary on a wide range of issues.

The Knight First Amendment Institute, which works to protect free speech, claims the users’ First Amendment rights were violated when they were blocked because it denied them the opportunity to participate in the discussion. Jameel Jaffer, an attorney for the institute, told the appeals court that public officials across the country are using social media to communicate with their constituents and that allowing them to block critics could have wide-ranging implications.

“If the court were to hold that this kind of blocking is beyond the reach of the First Amendment, that would have implications far beyond this particular context,” Jaffer said. “It would seemingly apply to the @POTUS and @WhiteHouse accounts as well. It would probably apply to every government website that has a space for public comment. I think you would be opening the door to manipulation and distortion of those spaces.”