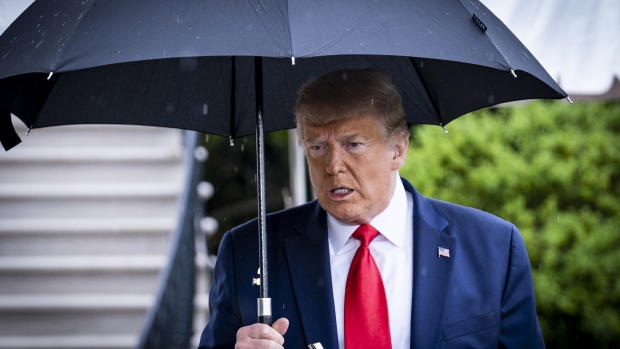 WASHINGTON, DC - JUNE 20:President Donald Trump stops to speak to the media in the rain on the South Lawn of the White House as he prepares to depart aboard Marine One for a rally in Tulsa, OK, on June 20, 2020 in Washington, DC. The rally is Trump's first in months since the coronavirus lockdown and his campaign acknowledged that six staff members had tested positive for the virus during routine screening. (Photo by Pete Marovich/Getty Images) , Photographer: Pete Marovich/Getty Images North America

The event -- which was the first rally planned after the president’s event in Tulsa drew lower-than-expected attendance amid fears over the coronavirus pandemic -- will be rescheduled in the coming weeks, White House Press Secretary Kayleigh McEnany told reporters traveling with the president to Florida.

Tim Murtaugh, the Trump campaign’s communications director said the rally was being “postponed for safety reasons,” citing the storm.

The tropical storm made landfall along the Jersey Shore on Friday, prompting flash flood watches throughout the New York metro area. Models from the National Hurricane Center show the storm expected to progress through the Northeast over the weekend.

The Trump campaign stepped up health and safety measures for the New Hampshire rally, setting the event outdoors and saying they would strongly encourage attendees to wear masks to avoid infection from the coronavirus.