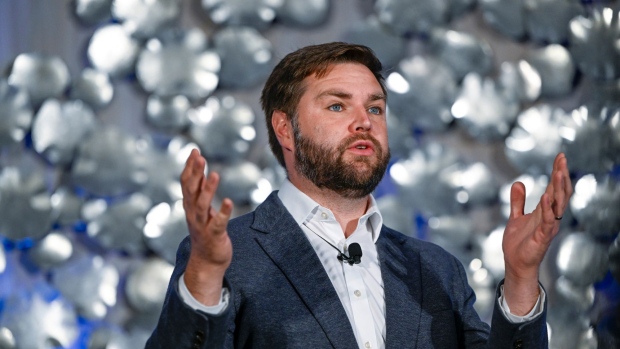 (Bloomberg) -- The new super political action committee set up by allies of former President Donald Trump has booked $2.1 million in ad buys, backing a pair of candidates he’s endorsed in races crucial to Republican hopes of controlling the Senate.

That marks the first effort to influence the midterm elections by Make America Great Again Inc., which was established last month and will be partly financed by some of the $95 million war chest Trump amassed since leaving office.

The super PAC, which aims to support Republican candidates in the final weeks of the midterms, is spending $1.3 million in Ohio backing JD Vance and $770,000 on behalf of Mehmet Oz in Pennsylvania, according to AdImpact.

Both candidates have been outraised by their Democratic opponents, Federal Election Commission filings show, and have relied on spending by super PACs to remain competitive on the airwaves.

Vance and Oz are both running to fill seats held by retiring Republicans, and if Democrats should win either contest it would complicate Republican efforts to secure a majority in the Senate, now divided evenly between the two parties.

Vance faces a close race against Democrat Tim Ryan, an Ohio congressman who had raised $22 million through the end of June, far more than the $3.6 million Vance’s campaign took in through the same period. From Oct. 1 through Election Day, Vance has booked $1.4 million compared to Ryan’s $6.3 million.

Ryan took in another $17 million in the third quarter, while Vance has yet to release his latest fundraising numbers. Candidates are due to report the totals to the FEC on Oct. 15.

The GOP still has an advantage in the state: The Senate Leadership Fund, a super PAC with ties to Senate Minority Leader Mitch McConnell, is spending $17.9 million over the same period. Vance has a 1.2% lead in the RealClearPolitics polling average.

In Pennsylvania, Democrat John Fetterman and his allies are spending $41 million compared to $26 million by Oz and Republicans, with the Senate Leadership Fund accounting for $18.4 million of that total.

His campaign has taken in $36 million since it began.

Trump’s super PAC is financed with money transferred from his existing leadership PACs. It will spend on candidates in the closing stretch of the 2022 midterms.

Save America, Trump’s existing leadership PAC, had $93 million cash on hand at the end of August, according to FEC filings. Make America Great Again PAC, Trump’s former campaign committee that he converted to a leadership PAC and distinct from the one formed Friday, had $2.4 million at the end of June.

Trump has endorsed more than 280 candidates in federal, state, local and international elections since leaving office, but the former president’s PAC has given only $910,500 spread among 181 candidates, a fraction of the money it’s raised.

By law, it can give no more than $5,000 per election to a federal campaign.

(Updates with Save America PAC activity, in final paragraph.)