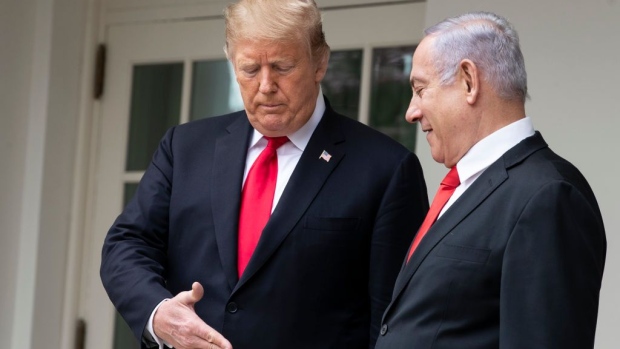 WASHINGTON, DC - MARCH 25: (L-R) U.S. President Donald Trump and Prime Minister of Israel Benjamin Netanyahu prepare to shake hands while walking through the colonnade prior to an Oval Office meeting at the White House March 25, 2019 in Washington, DC. Netanyahu is cutting short his visit to Washington due to a rocket attack in central Israel that had injured seven people. (Photo by Drew Angerer/Getty Images) , Photographer: Drew Angerer/Getty Images North America

Netanyahu and Gantz, whose parties will face one another for the third time in a year in March’s elections, will be arriving in Washington next week, where the president is expected to brief them on what he has called “the ultimate deal.”

Israeli leaders historically have chafed at U.S. plans to impose peace terms, preferring instead for Americans to broker peace negotiations. The Trump plan is different. In Israel, it is already being called “the deal of the century.” While the White House has not yet released any details, administration officials tell me a preview of some of the plan’s parameters can be found in a March 2019 speech delivered by U.S. Ambassador David Friedman.

In the speech, Friedman argues that putting off the peace process risks leaving the deal-making to a future administration — one that would not be as friendly to Israel as Trump’s. “Can we leave this to an administration that may not understand the need for Israel to maintain overriding security control of Judea and Samaria and a permanent defense position in the Jordan valley?” he asked, using the biblical names of the territory that comprise the West Bank.

It was not merely a throwaway line. Both Netanyahu and Gantz have said they would begin annexation of key areas of the Jordan River valley, though Gantz has said he would do this in conjunction with the international community. Needless to say, this has been a red line for the Palestinian Authority.

Friedman also raised the issue of Jerusalem in that speech (not surprising, since he helped orchestrate moving the U.S. embassy from Tel Aviv to Jerusalem). “I think that even three millennia ago, King David recognized that Israel’s enemies would seek to undermine the centrality of Jerusalem to the state of Israel and to mischaracterize and vilify the Jewish state,” he said.

Here, administration officials say, Friedman is reinforcing another element of the peace plan: that East and West Jerusalem will remain under Israeli sovereignty. Prior peace negotiations have put off the final status of Jerusalem. Palestinians claim the city, known in Arabic as al-Quds, as their capital. In the final weeks of the presidency of Barack Obama, the U.S. abstained from a UN Security Council vote that declared Israel’s presence in East Jerusalem was occupied territory. Israel unified the city after the Six Day War in 1967.

Other Washington sources who have been briefed on the plan tell me the Palestinians will have to recognize Israel as a Jewish state as a condition for accepting the territory carved out of the West Bank and Gaza Strip that would make up their future state. This was a key demand from Netanyahu during the Obama administration, but unlike Trump, Obama did not endorse this position during negotiations.

So Trump’s vision for a two-state solution will almost certainly be rejected by the Palestinians. Ten years ago, such an open rejection would have been a diplomatic disaster for the U.S. Until recently, Arab states conditioned cooperation against Iran and on counterterrorism to a viable peace process between Israel and the Palestinians. If a U.S. president had offered the Trump plan in 2010, he would have jeopardized that cooperation.

Now the world is a different place. Countries such as Saudi Arabia and Egypt no longer view counterterrorism or opposition to Iran as a favor to the U.S. It is a matter of national survival.

The main risk for Trump’s plan is that it could embolden Israel to take steps that would make it much harder to reach a peace deal with the Palestinians. In this sense, Trump’s proposal could encourage Israeli unilateralism. If Palestinians reject the plan, as expected, it could become “an instrument that facilitates an American blessing of an Israeli annexation,” said David Makovsky, a senior fellow at the Washington Institute for Near East Policy.

That is a danger. But there is also a chance that Trump’s departure from the prior peace-process consensus could spur the Palestinians to make new compromises. That won’t happen right away. If the president is re-elected in November, however, the Palestinian leadership may reconsider their options.

Last year, the president’s son-in-law, Jared Kushner, unveiled an economic plan in Bahrain, promising to help raise $50 billion in private and regional government investment if the Palestinians accepted a peace deal with Israel. The Palestinian Authority boycotted that event. If they are looking at four more years of Trump in the White House, that bribe will be a tempting alternative to the cold shoulder the Palestinians have received for most of Trump’s first term.

To contact the author of this story: Eli Lake at elake1@bloomberg.net