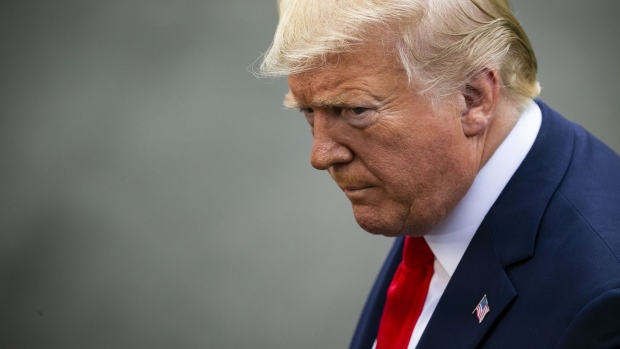 (Bloomberg) -- The misery spreading through the U.S. economy is posing a significant threat to President Donald Trump’s re-election in November.

The Misery Index, the unemployment rate added to the year-over-year change in the main consumer price index, is expected to be at a record high in November, based on calculations by Bloomberg Economics.

Historically, such increases have correlated with a loss for the incumbent party in the White House, and right now “the signal has never been stronger in favor of the challenger,” according to the report Tuesday by Bloomberg economist Andrew Husby.

He also analyzed 16 battleground states and found that the labor market in all of them has deteriorated since the start of the Covid-19 crisis. At the same time, 10 out of the 16 saw a shift in sentiment toward Joe Biden, the presumptive Democratic nominee.

The ground has shifted markedly since earlier this year. The economy’s strength was going to be Trump’s central argument for a second term, until the pandemic hit and nationwide lockdowns to contain the coronavirus plunged the U.S. into recession.

Husby’s economic analysis is in line with recent polls. Biden leads Trump by almost 10 percentage points in the RealClearPolitics average of national surveys, a larger advantage than any enjoyed by Hillary Clinton in the last six months of the 2016 campaign.

Biden is also in position to wrest electoral votes in five states Trump won in 2016: Arizona, Florida, Pennsylvania, Michigan and Wisconsin. These five would give Biden a 98-vote margin in the Electoral College, even assuming Trump takes other states he won four years ago.

Not everything is going Biden’s way. While unemployment and inflation imply a deterioration in Trump’s prospects, indicators including stock prices, home prices and wage growth all continue to point to success for the incumbent, according to Bloomberg Economics.

An accelerated recovery between now and November could also shift voters’ views on Trump’s response to the pandemic and its economic costs, Husby wrote.