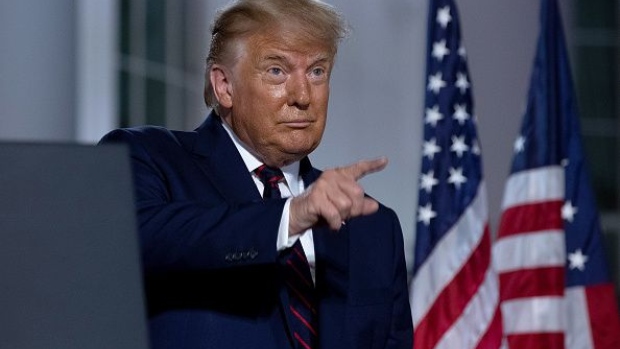 (Bloomberg Opinion) -- Even before Hillary Clinton conceded defeat in 2016, the aphorism “It’s Trump’s party now” had been endlessly recycled by those delighted and dismayed by The Donald “body-snatching” the GOP and transforming its vision of America.

Each of these 11 speeches was algorithmically analyzed to assess the frequency, context and sentiment with which the candidates spoke about “America.”(2)

The results put statistical flesh on the bones of perception that Trump’s worldview is America first, most and darkest.

In his 2020 nomination acceptance Donald Trump spoke about America more often than he did in 2016 – and more than any of his recent predecessors. The closest second was George W. Bush in 2004, who spoke against the backdrop of the Iraq conflict and his Global War on Terror.

In 2020, Donald Trump spoke about America in a wider array of contexts – from auto production to the “culture war” – than any of his recent predecessors, and almost double his rate in 2016.

Given that numerous commentators have noted the paucity of specific plans for a second Trump term, the president may well have been seeking to substitute patriotism for policy.

Trump’s 2016 nomination acceptance contained more negative sentiments about America and its problems than any of his recent predecessors. In keeping with other two-time nominees, Trump projected greater positivity during his second acceptance speech (while defending his first term), but even in 2020 he was more negative than any recent Republican, save for Bob Dole.

In 2015, Nick Gillespie wrote an article, “Trump as Political Pick-Up Artist,” in which he claimed “The Donald is ‘Negging’ His Rivals Brilliantly,” citing Nicky Woolf’s definition of the technique:

“Negging, as it is called, is in essence a trick. The idea is to undermine a woman’s confidence by making backhanded or snide remarks – give a compliment with one hand, and take away with the other. It is about control, putting the man in charge of the interaction by pushing the woman to earn his approval.”

In dating, negging is a line like, “You’d have such a great smile if you fixed your teeth.” In politics, it’s Donald Trump’s 2016 appeal to African-American voters:

Like the “War on Terror,” “Make America Great Again” is tantalizing in promise, Sisyphean in impossibility and relentless in repetition: Instead of offering voters a set of goals to be achieved, it leaves them trapped in a negging spin-cycle of storm clouds and sunlit uplands that, by definition cannot end.

(1) Nomination acceptance speeches were chosen in order to assess all of the candidates in comparable rhetorical conditions.

(2) The definition of “America” across all 11 speeches encompassed 177 separate terms, including “our nation,” “United States,” “land of the Free,” etc.