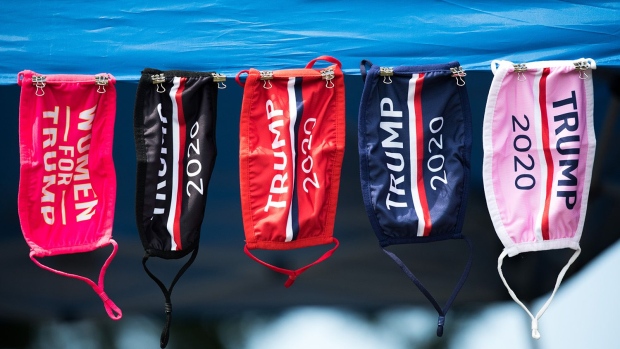 (Bloomberg) -- Small-dollar donors provided more than half of President Donald Trump’s $1 billion campaign war chest, but their largess has not extended to other Republican candidates, raising alarms for down-ballot races and the party’s prospects in future elections.

Some 1.5 million Trump supporters have dropped money this election cycle on red MAGA caps and #BuildTheWall t-shirts, yet other GOP candidates, including some in key Senate races, aren’t seeing the same level of enthusiasm. Down-ballot Republicans are even trailing Democrats in small-dollar contributions.

That’s left Republican leaders wondering whether individual contributors motivated by Trump will close their wallets once the president is no longer on the ballot, potentially jeopardizing their ability to compete for control of the U.S. House and Senate.

Even more troubling to Republicans is that Democratic small donors are giving more broadly. They are more inclined to support like-minded candidates, spreading the wealth beyond a single high-profile figure.

This cycle, down-ballot Republican candidates are receiving far fewer small-dollar donations than Trump through the online contribution platform that he promotes.

Trump has built a loyal base of donors who contribute less than $200, raising 56% of his sizable haul from them. But those donors haven’t transferred that loyalty to other Republicans, an analysis of WinRed’s Federal Election Commission filings show.

For example, the six Senate incumbents in races rated as toss-ups by the Cook Political Report haven’t fared nearly as well as the president. None have raised as much as 8% of their money from small-dollar donors through WinRed.

Maine Senator Susan Collins, facing a tough race after voting to confirm Brett Kavanaugh to the U.S. Supreme Court, has brought in about $325,000 from Trump’s legion of grassroots givers, or 2.3% of the total she’s raised. Colorado Senator Cory Gardner, also in a close race, raised just 3.4% of his campaign funds, or a little less than 445,000, from small-dollar donors who also gave to Trump.

“The Republican brain trust needs to be thinking long and hard about how to keep the Trump donors engaged and inside the GOP tent after he exits the stage,” said Dan Eberhart, a veteran party fundraiser. He worries that without Trump at the top of the ticket, they’ll stop giving to the party or to down-ballot candidates who could be the next generation of Republican stars.

Part of the problem, according to Michael Malbin, director of the Campaign Finance Institute, a research organization that studies money in politics, is Trump’s singular popularity among fans who are not traditional Republicans and might not have given to politicians in the past.

“It’s really not loyalty to the Republican Party for these donors, it’s intensity of loyalty to Donald Trump,” says David Schultz, a professor of political science at Hamline University.

Malbin says much of the blame for the low numbers lies with the candidates who have to give grassroots donors a reason to contribute. “You can’t just put up a technology and expect it to take off by itself,” he said.

ActBlue, the Democrats’ online contribution platform, has directed $1.7 billion to the party’s federal candidates and committees in this election cycle, more than three times as much as taken in by WinRed, which launched in June 2019 and is playing catch-up. ActBlue has helped Senate candidates like Mark Kelly in Arizona, Sara Gideon in Maine and Jaime Harrison in South Carolina outraise their incumbent Republican opponents.

“What ActBlue has become is a vehicle for donors who care about national causes who find like-minded candidates,” Malbin said.

Trump and the RNC send a steady stream of messages to supporters, but they largely focus on Trump, attacking opponents and labeling investigations of his administration as witch hunts and criticism as hoaxes. They also hawk merchandise to promote his issues like building a wall on the U.S-Mexico border, establishing the U.S. Space Force, and backing police.

Trump and his family are front and center in the vast majority of the pitches. “Pres. Trump: I texted you. My son, Eric, texted you. Now I’m texting you AGAIN,” read one RNC text sent to supporters Monday asking for a donation. “Lara Trump: Pres. Trump wants to meet YOU in Washington, DC!” another reads, “DON’T WAIT! Donate to WIN NOW!”

In 2016, Trump short-circuited party leaders’ efforts to reach out to minorities, instead eking out a narrow victory by attracting White, working-class voters and dropping party orthodoxies like free trade and low tariffs. And whether the end of the Trump era comes now or in four years, the party will be changed.

The Republican Party, well aware that so many of its voters are engaged largely because of the president, has moved solidly behind him. Schultz notes that the party did not adopt a formal platform at its convention, instead endorsing the positions of the president as its own. But the shift toward Trump may not be enough to move those small-dollar supporters to write checks without his charismatic leadership.

“This is a Humpty Dumpty question. Can you now go back to where you were?,” Schultz asked, noting that regardless of whether Trump wins or loses in November, he had made a mark on the party but leaves no obvious heir. “I’m just not sure who will hold onto Trump’s coalition without Trump.”

Ray Gazzier, a Houston-based financial adviser who first contributed to Trump in 2016 and has made several $100 donations since, remains an avid supporter.

“He’s the best freaking president ever,” he says. He says that while he’d support a more establishment Republican in the future, it would be with much less enthusiasm.But, he said, “If it was Donald Trump Jr. or Ivanka or someone like that, I’d be on board with that.”