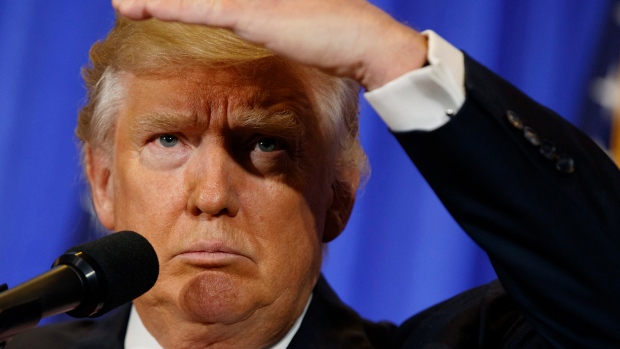 Donald Trump can’t have his cake and eat it, too, when it comes to the strength of the U.S. dollar.

In an interview published Tuesday in The Wall Street Journal, the president-elect said the dollar was too strong and was “killing” the ability of U.S. companies to compete with China.

However, one portfolio manager argues that Trump can’t talk down the greenback while simultaneously clinging to his assertion that he will be the “greatest jobs president that God ever created.”

“You can’t have your cake and eat it, too,” Ryan Lewenza, Senior Vice President and Portfolio Manager at Turner Investments, told BNN on Tuesday. “The reason why we’ve got a strong U.S. dollar is the unemployment rate is at 4.5 per cent … in Europe it’s at 10 per cent. [Trump] can try and talk [the dollar’s value] down, but that’s not his role.”

Lewenza added that Trump’s unpredictability is already leading him to contradict his own public comments.

“What I find so comical about it is it’s completely at odds with his earlier negative attack on Fed Chairperson Yellen,” he said. “He said she’s too accommodating, they’re keeping interest rates too low, to basically support and help Obama. Well, here, if she becomes more aggressive and tightens, it’s only going to boost the dollar further.”

“The second point is,” he added, “it’s completely at odds with his view that the U.S. economy is so weak. A strong dollar is a reflection of a stronger economy.”

Trump has already shown an ability to bend companies to his will by calling them out via Twitter. His 140-character warning to Ford was followed promptly by the company’s decision to shutter a proposed US$1.6B plant in Mexico, though the company refused to draw a correlation between the tweet and his company’s decision.

However, Lewenza is unsure whether Trump’s tendency towards unpredictability will serve him well as president.

“That unpredictable nature he wants … I can understand that in the business world. I’m just wondering, can you translate that as a government politician and as the leader of the free world. We’ll see if [he] can do that successfully,” he told BNN.

“Our baseline is that some of his policies are positive, but this uncertainty of what he actually means - does he box himself into a corner through tweets? This is the negative side of his rash and unpredictable nature.”