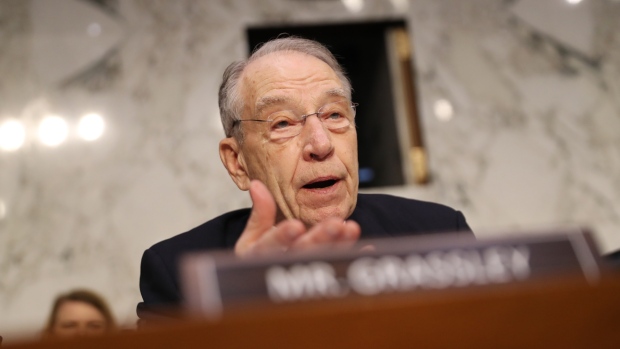 U.S. Trade Representative Robert Lighthizer said he’s committed to working with Democrats on the new North American trade agreement, and predicted that the resulting deal will get broad approval in Congress.

“I am aware of specific areas where members have ideas to strengthen the agreement, and we are having constructive discussions,” Lighthizer said in his prepared opening remarks at a Senate Finance Committee hearing on trade policies Tuesday. “I continue to believe that the USMCA will win broad support in Congress, as it’s designed to do.”

He made no direct mention of China trade talks in his prepared remarks, though he’s likely to get grilled by lawmakers on that issue above all others.

His boss, President Donald Trump, cheered markets earlier Tuesday by saying he spoke with Chinese counterpart Xi Jinping and they’ll have an “extended meeting” later this month, boosting hopes for a breakthrough in stalled negotiations.

The U.S.-Mexico-Canada agreement, which was negotiated over a year and signed by leaders in November, needs approval by legislators to take effect. Trump’s surprise proposal this month to slap tariffs on all Mexican imports over border-security concerns threatened to derail the plan, but it’s now back on track after the president got a migration deal and dropped his threat.

Lighthizer already has been working closely with Democrats, particularly House Speaker Nancy Pelosi, to resolve concerns about the new accord -- including labor and environmental standards, as well as drug pricing -- before it can come up for a vote. He told senators on Tuesday that he’s also spent “countless” hours consulting business, labor and other groups, and said there’s wide agreement that Congress should pass the deal.

While business leaders and some in the White House are pushing for a vote before Congress goes on vacation in August, Democrats say they don’t want to rush the process.

“Timely passage of implementing legislation for the USMCA will benefit American workers, farmers, ranchers, and businesses throughout the century,” Lighthizer said in the remarks.

Trade will likely dominate the agenda when Canadian Prime Minister Justin Trudeau meets with Trump in Washington on Thursday. Canada is proceeding with ratification of the agreement, though time is running out to do so before an election there this fall, with Trudeau trailing in polls.