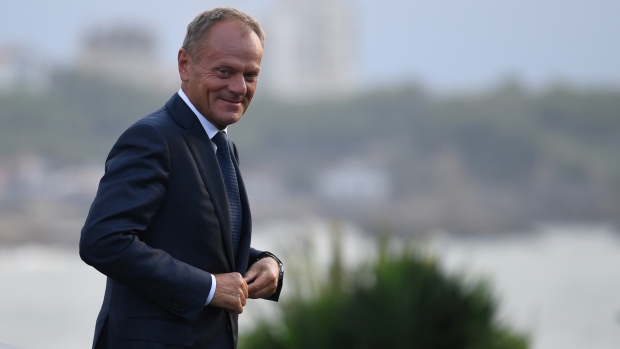 (Bloomberg) -- U.S. President Donald Trump says it’s “certainly possible” he’ll invite Vladimir Putin as a guest to next year’s Group of Seven summit in the United States, setting up a flashpoint with fellow nations who ejected the Russian leader over annexation of Crimea.

Trump spoke in Biarritz, France, on Sunday as the day’s session of the G-7 was set to get underway. He has previously called to fully readmit Putin into what was once the G-8, while the bloc’s fellow nations have balked at readmitting Russia, which was kicked out of the bloc over its hostilities in Ukraine.

The U.S. will host next year’s G-7, and Trump said it’s possible he’d invite Putin as a guest but doesn’t know.

Trump endorsed the idea of readmitting Russia to the G-7 last week. “I think it’s much more appropriate to have Russia in,” he had said. “So, I could certainly see it being the G-8 again. And if somebody would make that motion, I would certainly be disposed to think about it very favorably.”

The G-8 meetings had become the G-7 since 2014, when Russia was excluded from the group in protest of its annexation of Crimea. Countries regularly attend the G-7 as observers, without being full members. Spain, Australia, India and Chile are among the guests in Biarritz, for example.

The U.K., Germany, France and Canada have all dismissed the idea of re-introducing Russia as a full member, unless President Vladimir Putin makes concessions on the continuing hostilities in Ukraine.

“I do not want Russia to be reintegrated without conditions,” French President Emmanuel Macron told reporters last week. “No weakness.”

Donald Tusk, President of the European Council, took aim at Trump’s musings about Russia in a G-7 press conference on Saturday, saying “under no condition can we agree with this logic” and that he’d rather invite Ukraine than Russia.

“When it comes to the speculation around inviting Russia to the table, I would like to say this. First, the reasons why Russia was disinvited in 2014 are still valid. What is more, there are new reasons, such as the Russian provocation on the Azov Sea,” Tusk said.

Tusk also said Russia was first invited as a full member because it was seen to be pursuing a path of democracy and rule-of-law. “Is there anyone among us who can say with full conviction, not out of business calculation, that Russia is on that path?” Tusk asked.

Trump has often called for efforts to improve U.S. relations with Putin, questioning the findings of U.S. intelligence agencies and former Special Counsel Robert Mueller that Russia interfered in the 2016 election in an effort to help Trump win.

--With assistance from Helene Fouquet.

To contact the editors responsible for this story: Alex Wayne at awayne3@bloomberg.net, Larry Liebert, Craig Gordon