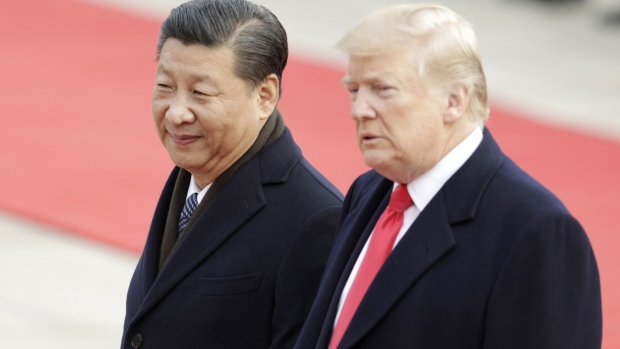 Xi Jinping, China's president, left, and U.S. President Donald Trump look on during a welcome ceremony outside the Great Hall of the People in Beijing, China. , Bloomberg

President Donald Trump said China may wait until after the 2020 U.S. presidential election to sign a trade agreement because Beijing would prefer to reach a deal with a Democrat.

“I think that China will probably say, ‘let’s wait,’” Trump told reporters in the Oval Office on Friday. “When I win, like almost immediately, they’re all going to sign deals.”

U.S. Trade Representative Robert Lighthizer and Treasury Secretary Steven Mnuchin are set to travel to China Monday for the first high-level, face-to-face trade negotiations between the world’s two biggest economies since talks broke down in May.

The White House confirmed Wednesday an earlier Bloomberg News report that senior officials will be in Shanghai next week to cover a range of issues including intellectual property, agriculture and the trade balance.

Trump and Chinese President Xi Jinping met at the Group of 20 summit in Japan last month and declared a tentative truce in their year-long trade war. The leaders directed their negotiators to resume trade talks. Since then Mnuchin, Lighthizer and their Chinese counterparts have spoken by phone.