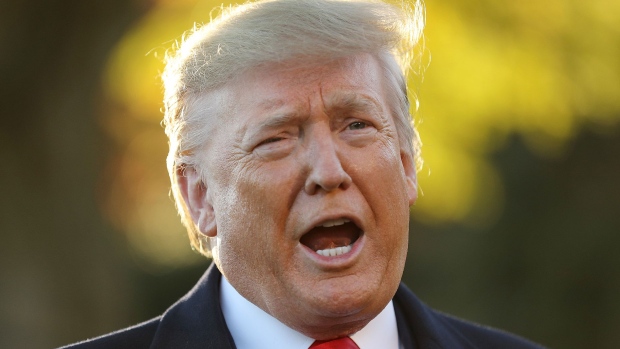 (Bloomberg) -- President Donald Trump said trade talks with China are moving along “very nicely,” and said the leaders in Beijing wanted a deal “much more than I do.”

Trump also described as “incorrect” reports about how much the U.S. was ready to roll back tariffs on China.

“If we don’t make that right deal, we’re not going to make a deal,” Trump told reporters on Saturday as he prepared to board Air Force One for a trip to Alabama to watch a college football game. “A lot of positive things are happening.”

On Thursday, signs were pointing toward a first-phase deal that would include a tariff rollback. A spokesman for China’s Ministry of Commerce said negotiators had discussions and “agreed to remove the additional tariffs in phases as progress is made on the agreement.”

White House economic adviser Larry Kudlow also said Thursday that “if there’s a phase one trade deal, there are going to be tariff agreements and concessions.”

Trump made clear Friday that the U.S. hasn’t yet reached an agreement and emphasized that he wouldn’t eliminate all tariffs,muddying hopes raised by China and even some of his own aides that the U.S. was ready to lift some tariffs to secure a trade deal.

There is an expectation that tariffs scheduled for Dec. 15, which would hit popular consumer items like smartphones and toys, won’t take effect as part of an initial deal. But a lot of tariffs remain in place including 15% on an additional $110 billion in goods that took effect Sept. 1.