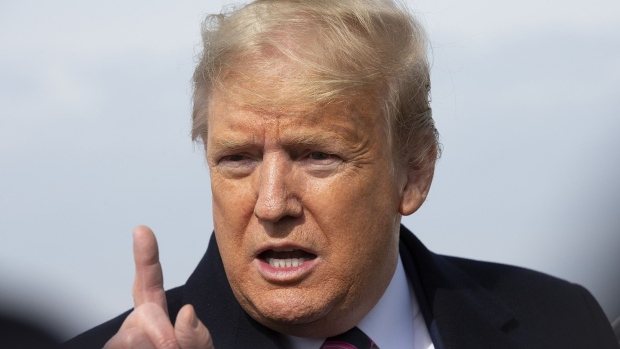 Donald Trump speaks to members of the media before boarding Air Force One at Joint Base Andrews, Maryland. , Stefani Reynolds/CNP/Bloomberg

“Because of all we’ve done the risk to the American people remains very low,” Trump said Wednesday at a news conference at the White House.

Markets fell for a fifth day before Trump spoke, continuing a slide as U.S. health officials warn of the virus’s likely spread in the country. Democrats and Republicans called for more funding than Trump requested to fight a potential U.S. outbreak. U.S. futures signaled further market declines on Thursday in overseas trading.

Trump said he had no disagreement with government health officials who have warned of a U.S. outbreak.

Minutes after Trump concluded his remarks, the Centers for Disease Control and Prevention announced it had identified the first coronavirus case in the U.S. of unknown origin. The California patient hasn’t traveled to China or had contact with other known victims of the disease, the CDC said.

Trump and Pence appeared with U.S. health officials to discuss the government’s coronavirus response. Trump said that of 15 Americans initially infected by the virus, eight have returned home and one remains hospitalized. Five have fully recovered, he said.

“We have quarantined those infected and those at risk,” he said. “We are rapidly developing a vaccine. The vaccine is coming along well.”

The best vaccine candidate may be ready for safety trials in about two months, said Anthony Fauci, the director of the National Institute of Allergy and Infectious Diseases. But he said it would be at least several months to a year before it would be approved for clinical use. He didn’t name the company developing the drug.

“We can’t rely on a vaccine over the next several months to a year,” Fauci said at the news conference, saying “public health measures” would be required to fight the virus until then. He said it is possible the coronavirus will circulate the globe again next year after the current outbreak is brought under control.

Asked whether the government has envisioned measures such as imposing quarantines on entire cities, the president said that there are plans on “a much larger scale” but that “we don’t think we’re going to need it.”

Trump’s advisers believe that fear of dying from the virus is overblown, but that in the event of an outbreak the strain on the U.S. health care system could be severe, chiefly because of hospitalizations, according to people familiar with the matter. They see coronavirus as a serious health threat that warrants a full government response yet assess the virus’s potential mortality rate in the U.S. as comparable to the flu.

While the seasonal flu kills tens of thousands of Americans annually, that’s because it infects millions of people. Its mortality rate is low, at about 0.1 per cent most years, according to the CDC.

Trump said that “69,000 people die every year” from the flu, calling it “incredible,” and compared the coronavirus to flu. The CDC estimates that at least 16,000 people have died in the current flu season and nearly 300,000 have been hospitalized.

“Treat this like a flu,” Trump said. “You want to wash your hands a lot. You want to stay, if you’re not feeling well, if you feel you have a flu, stay inside.

“And we’ll essentially have a flu shot for this in a fairly quick manner,” he said.

Health and Human Services Secretary Alex Azar suggested Wednesday that the Trump administration may seek more money for its virus response than the US$2.5 billion announced earlier this week after tough questioning from lawmakers of both parties. He told a House panel that the administration is planning to spend “at least” that amount and would work with Congress on a final figure.

Azar said at the White House news conference that early travel restrictions Trump imposed on people returning from China “succeeded in buying us incredibly valuable time” to prepare for the virus. “Our containment strategy has been working.”

But he cautioned: “The degree of risk has the potential to change quickly and we can expect to see more cases in the United States.”

Anne Schuchat, the principal deputy director of the CDC, said that “the trajectory of what we’re looking at over the weeks and months ahead is very uncertain.” She recommended Americans adhere to basic precautions, such as covering their mouths when they cough and sneeze and often washing their hands.

“Tried and true, not veryexciting measures but really important ways you can prevent the spread of respiratory viruses,” she said.

House GOP leader Kevin McCarthy said Wednesday that the White House’s request for US$1.25 billion in new spending “is a little low,” and that the necessary funding was probably about US$4 billion.

Meanwhile, the State Department has warned U.S. ambassadors, who are in Washington this week for an annual chiefs of mission conference, to make preparations for the coronavirus a top priority, said people familiar with the matter. Ambassadors have been told that the virus hasn’t been contained and is likely to spread to still more countries.

The administration is likely to impose additional travel restrictions and cancel flights in light of new coronavirus outbreaks in Italy and South Korea, a person familiar with the matter said. White House officials, though, are concerned that more stringent restrictions could harm the economy without preventing the virus from spreading in the U.S.

While U.S. stocks convulsed on the virus news, Americans’ consumer sentiment has remained upbeat. But a private gauge of business activity shrank in February for the first time since 2013 as the coronavirus hit supply chains and made firms hesitant to place orders.

Economists surveyed by Bloomberg have lowered their estimates this month for economic growth in the first quarter to a 1.5 per cent annual pace from 1.7 per cent seen in early January. That would be the weakest performance since the final three months of 2018.

The president’s comments come a day after the administration sent conflicting messages about the risk that the virus would spread in the U.S. Trump, speaking Tuesday in New Delhi during a two-day trip to India, said the virus was “very well under control in our country.” Hours later, the CDC warned that the virus’s spread in America is inevitable and could significantly disrupt the world’s largest economy.

Peter Marks, head of the FDA’s Center for Biologics Evaluation and Research, said in an interview on Wednesday that “we are on the cusp of the pandemic.”

“Is it definitely going to happen? No, but there is significant concern. As of overnight we have cases on six continents,” he said.

The World Health Organization reported on Wednesday that the number of global infections exceeded 81,000, up 871 in a day, and that cases were reported in four more countries -- Algeria, Austria, Croatia and Switzerland.

Azar said Wednesday the U.S. has a 15th confirmed case of the coronavirus. His count doesn’t include the 42 American passengers who were evacuated from the Diamond Princess cruise ship or three who were repatriated from Wuhan, China, the epicenter of the outbreak.

Nevertheless, there is deep concern on Capitol Hill that the government is unprepared for a domestic outbreak.

New funding from Congress would be used to help expand disease surveillance, bolster state and local health agencies, fund work on vaccines and drug treatments and help fortify the strategic national stockpile with protective gear including masks and respirators.

About half of the US$2.5 billion the Trump administration requested would come from reallocated funds, including US$535 million for efforts to combat Ebola, according to a person familiar with the matter.

Some lawmakers have pushed Trump for a more aggressive response, including broader restrictions on travel from countries with outbreaks. But there are worries within the White House about the impact on the economy -- and by extension, the president’s re-election campaign.

Democrats have responded with their own plans to combat the virus. Senate Democratic leader Chuck Schumer on Wednesday proposed US$8.5 billion in spending for the virus response. House Speaker Nancy Pelosi called Trump’s response “meager, anemic,” and a Democratic aide said the House would vote on its own funding plan the week of March 9.

On Wednesday, the death toll in China from the virus reached 2,715, making up the bulk of the 2,771 fatalities worldwide. Four more cases were reported at an Italian resort -- bringing the country’s number of cases to 374 -- and Brazil confirmed the first coronavirus case in Latin America.

The mortality rate for the virus -- the percentage of people that it kills -- has varied in different parts of the outbreak. In Wuhan, the center of the epidemic in China, health officials said earlier this month the mortality rate was about 5 per cent, compared with a far lower rate elsewhere in the country.

The toll of the coronavirus outbreak may not be known for months, after officials can better assess what may be many hidden, mild cases that were never diagnosed. And the death toll from a disease isn’t just a reflection of its deadliness to an individual, but how many people it infects.

Ebola virus disease, for example, is far more dangerous to any individual patient. But just like flu, a respiratory disease that spreads easily to millions of people can produce a far higher death count due to the sheer number of patients.