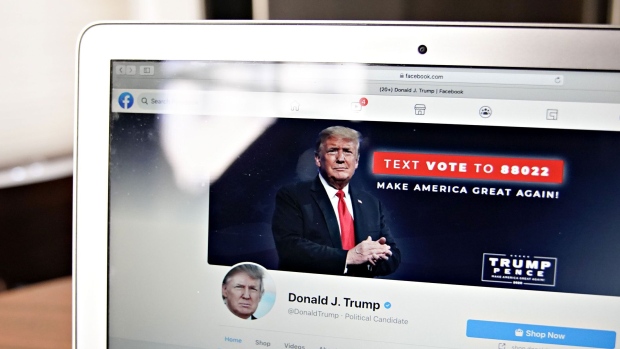 (Bloomberg) -- Former President Donald Trump told a judge his lawsuit against Facebook Inc. over its suspension of his account should stay in Florida because a new law signed by Governor Ron DeSantis could help his case.

Facebook and Chief Executive Officer Mark Zuckerberg are trying to transfer the suit to the company’s home turf in California to dodge the new -- but stalled -- Florida law that bars social-media platforms from suspending accounts of political candidates, Trump said in a filing late Tuesday in federal court in Miami.

“Facebook’s goal is to wholly deprive” Trump and other plaintiffs of “their day in court,” according to the filing. “This is the playbook always pursued the big social media platforms, with great success.”

Trump sued Facebook, Twitter Inc. and Google’s YouTube over the suspension of his accounts in the days after a mob of his supporters -- incited by false claims of voter fraud that were spread on social media -- violently attacked the Capitol on Jan. 6.

DeSantis, a close Trump ally, responded by pushing through a new Florida law that made such bans illegal in Florida. The Social Media Platforms Act was temporarily put on hold by a federal judge in June in a separate case brought by two trade associations. The state has appealed that ruling.

The companies have argued their terms of service allow them to choose which jurisdiction should handle lawsuits filed by users. Trump’s suit against Google, a subsidiary of Alphabet Inc., was transferred to California earlier this month.

Trump argued in Tuesday’s filing that Facebook can’t choose the forum for suits because Zuckerberg is also named as a defendant. The former president claims the CEO “personally and directly” decided to ban Trump.

In the June decision putting the Florida law on hold, U.S. District Judge Robert Hinkle in Tallahassee said it would violate the platforms’ rights to set their own standards for content. He also said DeSantis and Republicans demonstrated bias in pushing through a law that favored Trump.

“The Governor’s signing statement and numerous remarks of legislators show rather clearly that the legislation is viewpoint-based,” the judge said.