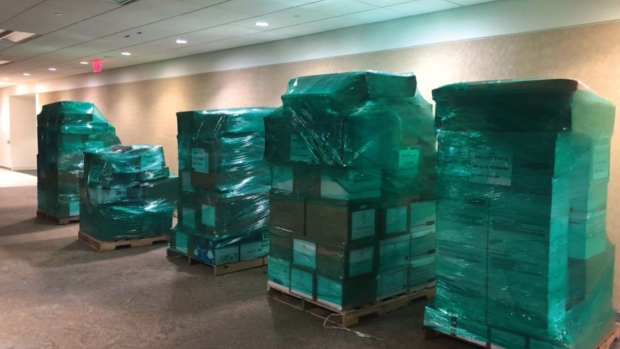 Several pallets of document boxes ready for shipment to Trump's Mar-a-Lago club, according to a July 2021 email from Trump’s post-presidential office. , Bloomberg

(Bloomberg) -- Former President Donald Trump publicly said that one reason that the FBI found boxes of classified documents improperly stored at his Florida estate was that federal workers had packed up the White House after his 2020 defeat.

But documents obtained by Bloomberg News under a Freedom of Information Act request suggest a different story. More than 100 pages of emails and shipping lists between White House and transition staff and the US General Services Administration describe the minutiae of moving the Trump White House from Washington, DC, to Florida, down to how many rolls of bubble wrap and tape, all within a plan signed by then-Chief of Staff Mark Meadows.

One thing is clear: The boxes were packed when the movers got there.

While the records don’t specify what the boxes contained, they provide the most detailed account to date of how the GSA assisted the outgoing administration between January and September 2021.

After the FBI’s unprecedented Aug. 8 search of Trump’s Mar-a-Lago estate, the former president and his allies, including Fox News’s Sean Hannity, Stephen Bannon’s Breitbart News and former Trump defense official Kash Patel, have claimed that Trump can’t be held legally responsible for the dozens of boxes of highly classified documents found around Mar-a-Lago because the GSA — essentially the federal government’s office and property manager — was in charge of filling boxes and shipping them.

“They packed them,” Trump told Hannity on Sept. 21, the latest effort by him and his supporters to deflect blame after the search, which has since led to a legal fight that is now headed to the US Supreme Court over what records the US Justice Department can review as part of its inquiry into the alleged mishandling of the nation’s most sensitive secrets. “The GSA packed the boxes, moved them to the president’s home like they did for Obama and Clinton and Bush, and President Trump invited the DOJ in and said, whatever you guys need,” Patel said on a radio talk show in August. Patel was Trump’s point person to his presidential records at the National Archives.

On Jan. 11, 2021, five days after Trump supporters stormed the US Capitol in an attempt to overturn President Joe Biden’s victory, Meadows signed an agreement that laid out the guidelines for setting up Mar-a-Lago as temporary office space for six months for Trump and former Vice President Mike Pence. It included $2 million to assist Trump with the transition and $520,000 for Pence. The money was to be used for office space, furniture, shipping costs and other expenses.

Early emails show Trump’s aides would be working daily out of a kitchen at Mar-a-Lago and other rooms at the resort, needing at least 100 boxes at a time for tasks like “processing and appraising” gifts before sending them to the National Archives. The GSA also secured office space in Arlington, Virginia, for Trump’s staff.

By April 14, 2021, a Trump aide sent the GSA what she described herself as  a “weird” question: “Does GSA work with a contractor for interstate shipping? We have a portrait of President Trump and it needs to be shipped to FL, but in its crate it is 300lbs, 6 x 8 feet,” wrote Desiree Thompson Sayle, the correspondence director for the Office of Donald Trump. A week later, a GSA facilities manager, Kathy Geisler, told Thompson Sayle that because that was considered personal property, taxpayer dollars could not be used to ship it.

A GSA spokesperson said its contract with Trump only involved shipping the boxes to Florida, not packing them. “The outgoing transition team was responsible for putting the boxes on pallets and shrink-wrapping each pallet,” the spokesperson said. A representative for Trump did not immediately return a message seeking comment.

The logistics took place at the same time the National Archives and Records Administration was expressing deep concerns about the presidential documents that did not belong to Trump personally and were supposed to be stored with them. On May 6, 2021, according to different records obtained by Bloomberg News under a separate FOIA request, the National Archives’ top lawyer advised three attorneys for Trump that his administration failed to hand over correspondence between the former president and North Korean leader Kim Jong-un, as well as a letter former President Barack Obama left for Trump during the transition. Those documents are missing.

On July 7, 2021, Geisler emailed Thompson Sayle and William “Beau” Harrison, Trump’s former assistant for operations,  to arrange a time to meet “to discuss shipping to Florida.” The next day, Thompson Sayle emailed Geisler to thank her for “taking the time to go over next steps for our big move.” She rattled off a list of supplies Trump’s outgoing transition needed to pack and ship items to Mar-a-Lago: bubble wrap, shrink wrap for wrapping pallets, 250 sheets of packing paper, 12 rolls of packing tape, 15 small boxes, 30 bankers boxes — the kind the FBI photographed containing papers marked “Top Secret/Sensitive Compartmented Information” — 30 medium boxes and 10 large boxes.

She also asked Geisler if the Trump team could keep the autopen machine.

On July 19, Geisler again reminded Trump’s staff that federal funds could only be used to ship official material, not personal items.

“As a general rule, GSA cannot provide Transition funds to ship any items that are personal items of the Former President including gifts he has received,” Geisler wrote, attaching the regulations and guidance. “We will ask for a certification that no items being shipped are considered property of the former president.”

Geisler reiterated that if any item is “considered property of the Federal Government then it should go to NARA or GSA.”

Geisler emailed Thompson Sayle and Harrison, requesting "as part of our records to process the shipping to Florida," a signed letter "certifying that all items shipped to Florida and paid for from the Transition funds are required to wind down the office of the Former President or are items that are property of the Federal Government."

Harrison sent Geisler the certification and noted that the items shipped to Mar-a-Lago "will be utilized as we transition to the Office of the Former President's new location."In court filings, Trump’s lawyers have argued that he continues to have a personal interest in the seized materials and had “sole discretion to classify a record as personal or presidential.”

Thompson emailed Cheryl Williams, the manager of Supply, Procurement & Mail Operations, that evening saying she had the first pallet ready — meaning the boxes were already packed -- and it weighed in at 598 pounds.

Over the next week, Geisler and other GSA officials exchanged a flurry of emails about the exorbitant costs and logistics of using UPS and other couriers, to ship about 5 pallets to Mar-a-Lago and to a facility at Life Storage. In one email exchange, Thompson Sayle included several pictures of boxes stacked on pallets wrapped in cellophane. The correspondence strongly suggests that GSA was only involved in facilitating the shipping of the items and may not have had a role in packing the boxes.

It's not clear how many of the documents in this shipment contained the classified documents that the FBI ultimately recovered. But federal rules require classified material to be transported in a particular manner using pre-approved couriers.

By December, a representative for Trump would reach out to the National Archives to say they located some presidential records. NARA retrieved up 15 boxes of presidential records the following month. But protracted negotiations that ultimately failed led to the FBI search.