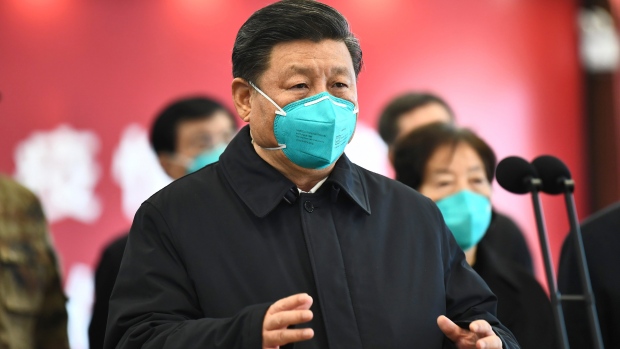 President Donald Trump said he doesn’t want to talk to Chinese President Xi Jinping right now and mused about eliminating the largest trading relationship in the world, with tensions high over the coronavirus outbreak.

Unprompted, he said that “we could cut off the whole relationship. If we did, what would happen? You’d save $500 billion,” an inaccurate reference to the volume of trade between the countries.

Trump has sought to blame China for the coronavirus pandemic as public confidence in his handling of the U.S. outbreak has sunk. There have been more than 1.3 million cases of COVID-19 in the U.S. and at least 82,900 deaths, the most in the world. China has reported only about 4,600 deaths from the disease.

The president and some of his allies have discussed somehow punishing Beijing for the outbreak, though any economic measures risk harm to the U.S., which is now in recession due to social-distancing practices adopted to curb the pandemic.

“Cheap labor turned out to be very expensive,” Trump said of China.

In the interview, Trump said he’s examining Chinese companies that trade on the NYSE and Nasdaq stock exchanges but don’t follow U.S. accounting rules. “We are looking at that very strongly,” he said, but he cautioned that it could backfire.

“Let’s say we do that, right,” Trump said. “So what are they going to do? They’re going to move their listing to London or someplace else.”

He also rejected renegotiating the so-called “phase one” trade deal he signed with Beijing in January.

“We’re not going to renegotiate,” he said. The virus “was never even a subject” when the deal was signed, he said. His re-election opponent, former Vice President Joe Biden, has sought to turn the trade deal -- one of Trump’s signature first-term accomplishments -- into a liability by alleging the president was focused on the agreement to the exclusion of the growing coronavirus outbreak.

While Chinese purchases of U.S. agricultural goods have recently picked up, the Global Times, a Communist Party publication, reported earlier this month that Beijing was weighing voiding or renegotiating the deal.

The publication said that officials in the Chinese government were angered by U.S. criticism of China’s handling of the coronavirus pandemic.

Trump said Thursday that while he still suspects the outbreak may be connected to a virology lab in Wuhan, China, he said it was unlikely the Chinese deliberately unleashed the pathogen. “I think more likely it got out of control,” he said.

The president agreed with Fox Business host Maria Bartiromo that China is trying to steal intellectual property and beat the U.S. to a coronavirus vaccine.

“We can stop them, they’re going to try doing it,” he said. “I mean, you can stop doing business with them, that’s one thing.”

Trump also threatened to replace board members of the Thrift Savings Plan, a retirement plan for federal workers, if they don’t follow through with a plan to defer shifting some of its investments into the stocks of Chinese companies.

The savings plan was scheduled to transfer roughly $50 billion of its international fund to mirror an MSCI All Country World Index, which captures emerging markets including China. The Federal Retirement Thrift Investment Board was under pressure from the Trump administration and some lawmakers in Congress to delay the move.

The board said Wednesday it would delay the move “due to a meaningfully different economic environment related in large part to the impact of the global Covid-19 pandemic” and the nomination of three new board members.

“You know it’s run by the Obama appointments, right?” Trump said of the savings plan. “We’re going to find out whether or not they’re going to do it very soon, and if they’re not, we’re going to replace them very quickly.”