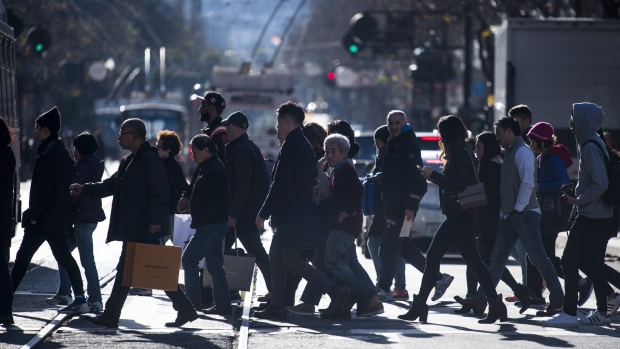 Pedestrians and shoppers carry shopping bags cross Market Street in San Francisco, California, U.S., on Monday, Dec. 26, 2016. The Bloomberg Consumer Comfort Index, a survey which measures attitudes about the economy, is scheduled to be released on December 29. , Bloomberg

(Bloomberg) -- President Donald Trump said Thursday that he’s planning a tax cut directed at the middle class that will be announced in the next year.

“It will be a very substantial tax cut,” Trump told congressional Republicans at a retreat in Baltimore. He said the tax cut would be “very, very inspirational” without providing details.

To contact the reporter on this story: Jordan Fabian in Washington at jfabian6@bloomberg.net

To contact the editors responsible for this story: Alex Wayne at awayne3@bloomberg.net, Justin Blum, Michael Shepard