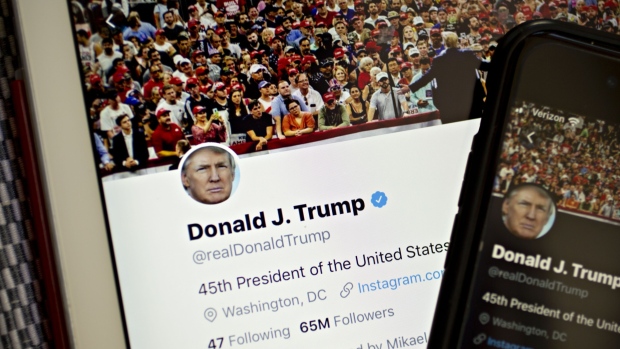 The Twitter profile of U.S. President Donald Trump is displayed on a tablet computer and smartphone in this arranged photograph taken in Arlington, Virginia, U.S., on Tuesday, Oct. 1, 2019. , Andrew Harrer/Bloomberg

Donald Trump said social media companies are unfairly censoring him after Twitter Inc. and Facebook Inc. blocked a video shared by accounts linked to the president for violating their policies on coronavirus misinformation.

“They’re doing anybody, on the right, anybody, any Republican, any conservative Republican is censored and look at the horrible things they say on the left,” Trump said.

The Trump re-election campaign’s Twitter account, @TeamTrump, was briefly banned from sending new tweets after it posted a clip of an interview Trump did Wednesday with Fox News in which he said children were “virtually immune” from the Covid-19 coronavirus.

Children “don’t have a problem, they just don’t have a problem,” Trump said in the video as part of an argument for why schools should reopen, contradicting medical authorities who say children can get sick. “It doesn’t have an impact on them. I’ve watched some doctors say they’re totally immune.”

Trump posted the same video to his account on Facebook, which removed the clip shortly before Twitter froze the campaign’s account. Both social-media companies have policies that forbid sharing misleading information about the coronavirus that could cause people harm.

On Thursday, Trump said: “Every doctor is saying what I’m saying -- not every doctor, I guess, there’ll be some that won’t.”

The @TeamTrump account resumed posting Wednesday evening after the video appeared to have been taken down. “The original Tweet from @TeamTrump is in violation of the Twitter Rules on COVID-19 misinformation, and we’ve required removal,” according to a post from Twitter spokesman Nick Pacilio. Though the president also shared the video on his personal account, @realDonaldTrump, that account wasn’t punished because the clip was re-shared from the campaign’s feed instead of uploaded directly, Twitter said.

Twitter, which had for years been criticized for its lack of action against Trump’s controversial tweets, has taken a more aggressive stand in recent months.

In late May, the company flagged two Trump posts about mail-in ballots, part of a new policy preventing false or confusing information related to voting. Shortly after that, Twitter highlighted another tweet for violating its rules against glorifying violence when Trump tweeted that “when the looting starts, the shooting starts,” a reference to protests against police brutality and racism in Minneapolis.

Facebook has also been under fire for what critics say is a failure to enforce its rules against Trump. In early July, an outside auditor found Facebook didn’t enforce its own voter suppression policies against the president when he posted misleading information about mail-in ballots.

Chief Executive Officer Mark Zuckerberg has said that fighting misinformation on Covid-19 is easier than on other topics because the company has reliable sources to help determine what is true, including the U.S. Centers for Disease Control and Prevention and the World Health Organization. Trump’s comments on children and Covid contradicted what officials at those organizations say about the virus.

--With assistance from Kurt Wagner and Sarah Frier.