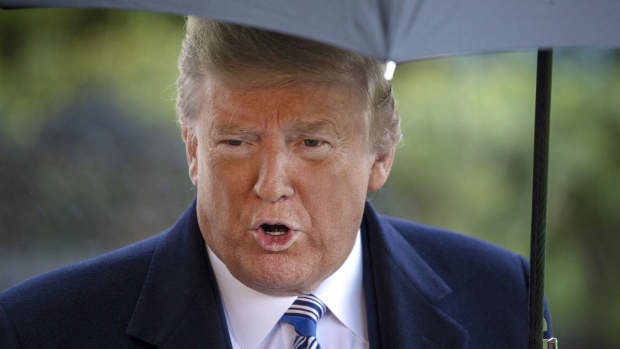 U.S. President Donald Trump speaks to members of the media before he boards Marine One on the South Lawn of the White House in Washington, D.C., U.S., on Saturday, March 28, 2020. Trump is traveling to Naval Station Norfolk to send off The USNS Comfort for deployment to New York City to responds to the rapid spread of coronavirus cases. Photographer: Tasos Katopodis/Bloomberg , Bloomberg

President Donald Trump said his administration expects the peak of deaths in the U.S. coronavirus outbreak to be reached in about two weeks, and that he would extend guidelines for Americans to distance themselves from one another until April 30.

Trump had previously aimed to return many Americans back to work by Easter Sunday holiday, April 12.

Anthony Fauci, the director of the National Institute for Allergy and Infectious Diseases, said earlier Sunday on CNN that millions of Americans may wind up infected by the virus and as many as 200,000 could die.

He said at the news conference that he and Deborah Birx, the State Department immunologist advising Vice President Mike Pence, had recommend Trump extend his goal for the U.S. to relax “social distancing” practices. He called the decision “wise and prudent.”

Fauci said his estimate of 200,000 deaths is “entirely conceivable” if efforts to mitigate the disease fail.

Trump said his Easter deadline “was just an aspiration.”

“That could be the peak number of deaths before it starts coming down,” he said. He said it would be possible for the numbers to go down and “spike up” if social distancing is relaxed too soon. “We don’t want that to happen.”