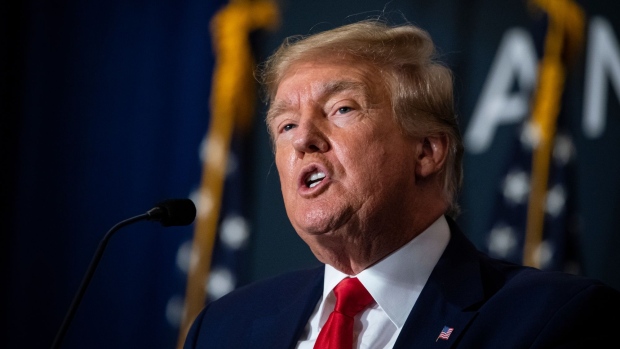 (Bloomberg) -- Donald Trump’s lawyers argued the statute of limitations shouldn’t apply to the lawsuit he filed against political rival Hillary Clinton because the “immense and unrelenting demands” of the job prevented him from doing so sooner.

The former president was simply too busy during his single term in office to discover the details of the alleged plot, which he claims involved a vast effort to falsely accuse him and his 2016 campaign of colluding with Russia and swamp him with costly investigations, his lawyers wrote in a filing Thursday night in federal court in Florida.

Trump “was preoccupied with carrying out his eminently important presidential duties and was therefore impeded from effectively asserting his rights,” his lawyers said.

The suit was filed in March under the civil version of a racketeering law normally used against organized crime. But Clinton argues Trump missed the four-year statute of limitations because all of the alleged conduct was known to him no later than Oct. 29, 2017, when he publicly accused several of the defendants of cooking up a Russia “witch hunt.”

US District Judge Donald Middlebrooks, an appointee of former President Bill Clinton, is weighing a joint motion to dismiss the case by Clinton, her 2016 campaign chairman John Podesta and former Democratic National Committee chair Debbie Wasserman Schultz, among others. They raised the statute of limitations as one of the reasons the suit should be thrown out.

The case is scheduled for trial in May.