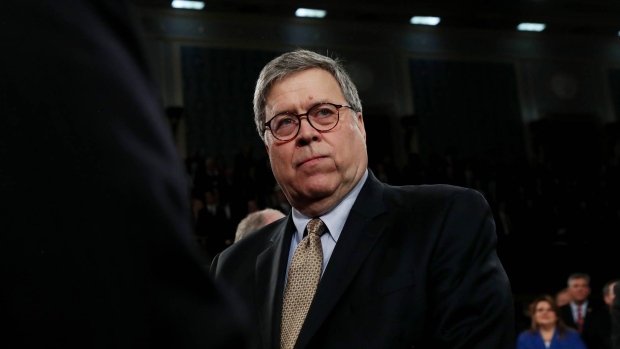 WASHINGTON, DC - FEBRUARY 04: U.S. Attorney General William Barr arrives to hear President Donald Trump deliver the State of the Union address in the House chamber on February 4, 2020 in Washington, DC. Trump is delivering his third State of the Union address on the night before the U.S. Senate is set to vote in his impeachment trial. (Photo by Leah Millis-Pool/Getty Images) , Photographer: Pool/Getty Images North America

(Bloomberg) -- President Donald Trump maintained Friday he has the legal right to intervene in criminal cases in response to Attorney General William Barr’s criticism that his tweeting has made his job “impossible.”

“This doesn’t mean that I do not have, as President, the legal right to do so, I do, but I have so far chosen not to!” Trump said on Twitter Friday.

Trump’s tweet marked his first public response to Barr’s televised interview on Thursday in which he said the president’s tweets and public comments about the Justice Department and ongoing cases make it difficult for him to do his job.

Barr’s department was thrust into a crisis when it reversed course this week on a recommendation about how long Roger Stone, one of Trump’s longtime associates, should go to prison for witness tampering and lying to Congress. The move prompted four career prosecutors to quit the case, but earned Barr kudos from the president and fueled criticism that the Justice Department has become politicized.

“It’s time to stop the tweeting about Department of Justice criminal cases,” Barr said in an interview with ABC News.

White House Press Secretary Stephanie Grisham said in a statement that Trump “wasn’t bothered by the comments at all, and he has the right, just like any American citizen, to publicly offer his opinions.”

To contact the reporter on this story: Elizabeth Wasserman in Washington at ewasserman2@bloomberg.net

To contact the editors responsible for this story: Elizabeth Wasserman at ewasserman2@bloomberg.net, Kathleen Hunter, Steve Geimann