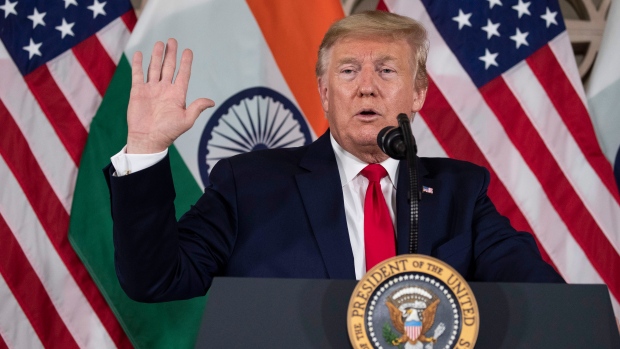 President Donald Trump said Democratic presidential front runner Bernie Sanders is advocating “totally unaffordable” policies that are “not going to work” during a meeting with business leaders Tuesday at the U.S. embassy in New Delhi.

“When we win re-election — I think we will — when we win, I think the market’s going to go up, it’s going to be like a rocket ship, like last time, but even more so,” Trump said. “I think the fact that the Democrats are so radical, so out of control, they honestly don’t know what they’re doing.”

Past presidents typically shied away from discussing domestic politics while on foreign soil, but Trump has seldom abided by that particular tradition and often laces into his opponents back home while overseas.

He went on to blame the election season for holding down the value of the stock market, saying that investors are worried Sanders and other candidates had “a real chance” of winning the presidency. The U.S. president is in India on a two-day state visit.

Trump’s broadside against the Vermont senator — who is leading the Democratic nominating contest after consecutive wins in New Hampshire and Nevada — came ahead of Tuesday night’s Democratic debate in South Carolina.

Still, Trump’s decision to explicitly target Sanders’s policies and cast a Democratic presidency as a danger to markets seemed to underscore worry within the White House of the extent to which the president’s re-election campaign hinges on a humming economy, particularly amid growing concerns over the impact of the Chinese coronavirus outbreak.

Trump repeatedly sought to downplay the possible impact of the disease after the Dow Jones Industrial Average and S&P 500 on Monday posted their sharpest daily declines since 2018.“Things like that happen” in business, Trump said of the losses, reiterating his belief that the virus was “under control” in the U.S. He said his administration was working “very hard” and spending “a tremendous amount of money” to address the outbreak, and noted the White House on Monday had asked Congress for US$2.5 billion in additional funds to fight coronavirus.

He said the money would be spent “on getting everything ready just in case something should happen and also helping other nations that aren’t equipped to do it.” The U.S. president also reiterated his confidence in Chinese President Xi Jinping, saying officials in Beijing were “working very hard.”“I think he’ll be in pretty good shape,” Trump said. “They’ve had a rough patch and I think right now they have it — it looks like they’re getting it under control more and more.”