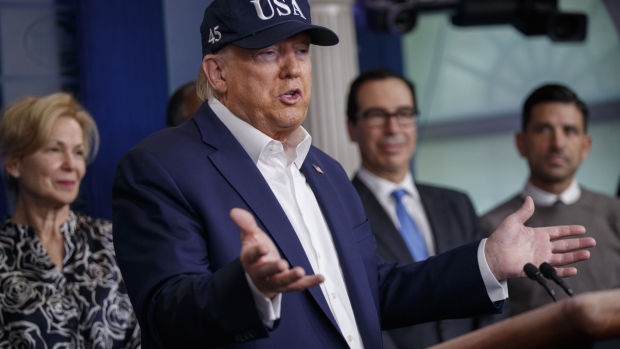 U.S. President Donald Trump speaks during a news conference in the briefing room of the White House in Washington, D.C., U.S., on Saturday, March 14, 2020. Trump said he took a test to determine whether he has coronavirus, days after learning that he's come in contact with people who were infected or are concerned they've got the virus. , Shawn Thew/EPA/Bloomberg

President Donald Trump said he has no plans to demote Federal Reserve Chair Jerome Powell but asserted -- as he has in the past -- that he has the right to.

Trump spoke at a press conference after a meeting of his coronavirus task force at the White House, revisiting his regular complaints about the U.S. central bank.

“We hope the Federal Reserve will finally get on board and do what they should do,” Trump said, days before central bankers hold their next policy meeting. “They should be much more proactive.”

As recently as Tuesday Trump called the Fed “pathetic” and “slow moving.”

But the Fed has been one of the few to already act since the world started spiraling toward a potential recession as a result of the spreading virus.

Last week the central bank executed a rare emergency rate cut in between its regulary scheduled meetings and then on Thursday it announced massive repo operations and expanded securities purchases to ease “temporary disruptions” in the bond market.

Powell and other central bankers around the world including Christine Lagarde have said they’re ready to use all their tools to stem the economic damage from the public health crisis but have emphasized that monetary policy has limits to combat it. They’ve urged governments including the U.S. to act on the fiscal policy front to counter the fallout.

The Fed is scheduled to meet next week and Trump has been pressing the cental bank for months to lower interest rates to zero. Currently the Fed’s target range for its benchmark interest rate is set at 1% to 1.25%, and several Wall Street economists predict it could move to zero, at next week’s meeting or even sooner.

“I think I have the right to do, to remove him as Chairman, he is, he has so far made a lot of bad decisions in my opinion,” Trump said Saturday in answer to a question about his views on Powell. “I’m not happy with the Fed because I think that they’re following and we should be leading. I’m not happy because if you look at the central banks, other central banks, largely they are lower than us, their rate.”

In February 2019, Trump asked White house lawyers about his options for stripping Powell of his chairmanship and leaving him as a Fed governor, Bloomberg reported. That would be an unprecedented move as the Fed is constructed as an independent body from the White House.

When Trump floated the idea previously, the Fed countered that a chair can only be removed for cause. And Powell has demonstrated his resolve to stay, saying in a March 2019 interview on “60 Minutes”: “The law is clear that I have a four-year term. And I fully intend to serve it.”