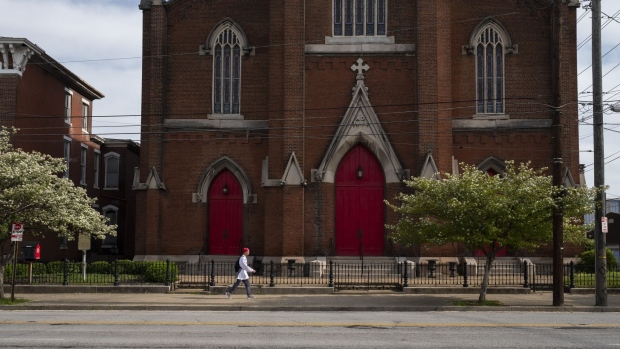 A pedestrian walks past a church in downtown Louisville, Kentucky, U.S., on Saturday, April 25, 2020. Louisville has projected a $115 million budget shortfall over the next 14 months, and without federal aid, will have to cut a fifth of its workforce, according to Louisville Mayor Greg Fischer. Photographer: Stacie Scott/Bloomberg , Bloomberg

President Donald Trump used the words “this weekend” when he demanded Friday that states allow houses of worship to reopen. Robert Jeffres, an influential Texas evangelical pastor, spoke with Trump afterward and told him he didn’t plan to open his megachurch until June 7.

“He wasn’t ordering every church to open,” said Jeffres, the senior minister at the First Baptist Church in Dallas who’s in regular contact with the president. “There’s no one-size-fits all.”

Houses of worship, by nature centers for community, are eager to open -- especially when businesses like liquor stores, many complain, have been open throughout the deadly coronavirus pandemic. But the faithful, despite Trump’s desire to cater to them politically, appear to be moving cautiously.

Jeffres, whose church spreads out across six blocks, plans to open only at 20% capacity. They will encourage mask-wearing and urge vulnerable populations, like the elderly, to continue to watch their popular services on TV or via livestream.

“There is an insatiable hunger among Christians right now to get back to worship,” he said. “Yet they want to do it in a safe way.”

That hunger has led to tensions with local officials. Several states have been the target of lawsuits, and on Friday a federal appeals court ruled that California churches must abide by Governor Gavin Newsom’s order to temporarily ban in-person religious services. Attorney General William Barr has threatened the state with legal action.

Congregation Etz Chaim, an Orthodox congregation in Los Angeles, immediately took Trump up on his word and sent an email out to congregants. It noted “with great pleasure and joy” that Sabbath services could begin again Friday evening.

Still, its defiance -- in a city that has asked its residents to stay home -- came with masks and social distance.

Some religious leaders have criticized Trump for pushing too soon. In a signed letter to the president Saturday in the Washington Post, two evangelicals called his demand “both irresponsible and potentially destructive.”

They noted outbreaks in churches in South Korea, Georgia, Texas and Arkansas. On Saturday, 40 cases were traced to a church in Frankfurt, Germany.

Some local leaders have tried accommodate religious services, with more than half of states already loosening rules on houses of worship. New York Governor Andrew Cuomo on Thursday allowed groups of 10 to gather -- the number for a minyan, the quorum needed for Jewish worship -- if socially distanced.

Some religious leaders say they simply won’t open until local leaders encourage them to do so.

Yahya Luqman, the imam at the Fazl Mosque in Washington, D.C., part of a larger local Ahmadiyya congregation in the area, said they remain closed -- and will for the foreseeable future. The biggest Muslim festival of the year, Eid al-Fitr, takes place Sunday after a month of fasting.

“We want people to have people safe and healthy and alive,” Luqman said. “Worship of God can occur at home, which is what we’re encouraging.”

At the start of May, Florida allowed houses of worship to reopen, and the First Presbyterian Church in Bonita Springs did so -- carefully.

Doug Pratt, the senior pastor, said the church sanctuary holds 1,300 people but now seats between 100 and 300 for their two Sunday services.

He said masks are encouraged. There is no choir, and no one can touch Bibles, psalm-books or church bulletins. The offering tray isn’t even passed.

“If people want to make a contribution, the offering plate is sitting at the door,” Pratt said.