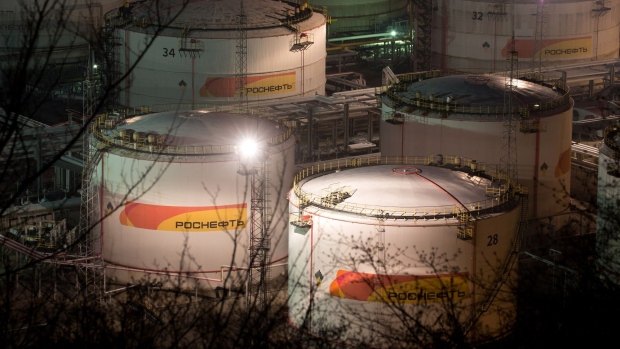 Lights illuminate oil storage tanks at night at the RN-Tuapsinsky refinery, operated by Rosneft Oil Co., in Tuapse, Russia, on Sunday, March 22, 2020. Major oil currencies have fallen much more this month following the plunge in Brent crude prices to less than $30 a barrel, with Russia’s ruble down by 15%. Photographer: Andrey Rudakov/Bloomberg , Bloomberg

(Bloomberg) -- President Donald Trump said he discussed the recent drop in oil prices with the leaders of Russia and Saudi Arabia in the hope of stopping the steep decline that’s threatening the industry.

Crude oil just had its worst quarter on record, tumbling 66% as the spread of coronavirus crushed demand and Saudi Arabia and Russia embarked on a price war that has flooded the market with supply.

Trump said the price drop was harming the U.S. oil industry, but also acknowledge it was helping the struggling airline industry and consumers, calling it “the greatest tax cut we’ve ever given.”