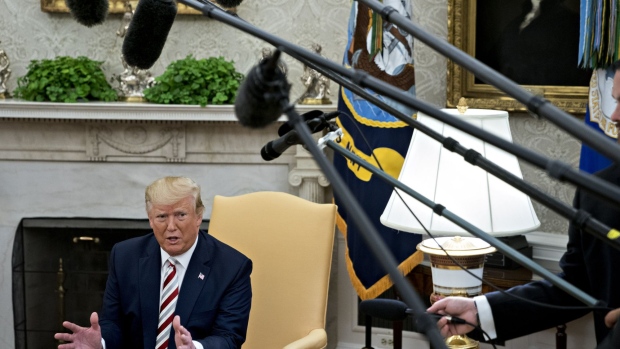 President Donald Trump has consistently rejected a growing number of forecasts that his trade war with China and slowing global growth are pitching the U.S. economy toward recession. But he’s also spending a lot of time outlining policies to stave it off.

Speaking to reporters Tuesday in the Oval Office, Trump said he’s open to a range of possible actions, including a payroll tax cut or bypassing Congress to reduce taxes by indexing capital gains. He repeated his demand that the Federal Reserve slash interest rates to bolster the economy. Yet he also suggested those actions aren’t necessary.

His comments Tuesday illustrate the balance the White House is trying to strike between touting growth under the Trump administration and laying the groundwork for possible fiscal stimulus if the economy falters.

With the 2020 campaign heating up, the growing odds of an economic contraction threaten to crush Trump’s hopes for a second term. Chances of a recession within the next year have risen to 35 per cent, according to an August survey of economists by Bloomberg News.

The Fake News LameStream Media is doing everything possible the “create” a U.S. recession, even though the numbers & facts are working totally in the opposite direction. They would be willing to hurt many people, but that doesn’t matter to them. Our Economy is sooo strong, sorry!

Trump also defended his trade war with China -- a dispute economists point to as a primary risk for global economic growth. He called any short-term pain the U.S. has to pay from the trade war “irrelevant.”

“My life would be a lot easier if I hadn’t taken China on,” Trump said. “But I like doing it because I have to do it.”

Economic trends tend to predict election outcomes, and recessions can be radioactive for the party in power. In the last century, the only elected presidents who lost re-election did so after overseeing a recession — George H.W. Bush in 1992, Jimmy Carter in 1980 and Herbert Hoover in 1932.

For Trump, the economy may be even more important than for his predecessors. His low-40s approval rating is already perilous for an incumbent, and the economy is the main factor keeping him afloat. He scores poorly on most other policy issues and on questions of leadership and character.

.....We are competing with many countries that have a far lower interest rate, and we should be lower than them. Yesterday, “highest Dollar in U.S.History.” No inflation. Wake up Federal Reserve. Such growth potential, almost like never before!

“I think the word recession is a word that’s inappropriate ‘cause it’s just a word that certain people -- I’m going to be kind, certain people and the media are trying to build up, because they’d love to see a recession,” Trump said Tuesday.

Yet, when asked about the economy, the president said he and his advisers have discussed “all types of options,” including the payroll tax cut, which supports Social Security and Medicare.

“We’re looking at various tax reductions” but the White House does that “all the time,” he said. “I’m not talking about doing anything at this moment.”

White House officials say the president has decided against cutting payroll taxes for now. One person familiar with the internal discussions said the idea had been floated by Trump’s top economic adviser, Larry Kudlow, but that even the suggestion of it had caused others to bristle. They said it would send a message to the outside world that the administration is worried about the state of an economy that Trump continues to insist is strong.

While the president remains bullish, he and his economic advisers have been casting about for ways to cut taxes to foster growth amid troubling signs. Business investment is cooling and manufacturing has weakened. U.S. factory activity deteriorated in July to an almost three-year low, according to the latest figures from the Institute for Supply Management.

This isn’t the first time Trump has suggested sweeping tax cuts while facing political headwinds. Before the mid-term elections last fall, he floated a 10% middle class tax cut -- much to the surprise of his own aides and allies in Congress. He never released any specifics about the cut, and after Republicans lost control of the House in the election, Treasury Secretary Steven Mnuchin said the idea was no longer being pursued.

Any new Trump tax cut plan is not likely to be welcomed on Capitol Hill. The Constitution mandates that tax legislation originate in the House, where Speaker Nancy Pelosi will refuse to consider bills that could buoy the re-election chances of the president and his party.

Even congressional Republicans are hesitant to put forward tax cut legislation, worried that would suggest that the economy is faltering heading into the 2020 campaign season.

“At this point, recession seems more of a political wish by Democrats than an economic reality,” Michael Zona, a spokesman for Senate Finance Chairman Chuck Grassley, an Iowa Republican, said in an email.

Major tax cuts all require congressional approval, but Trump, along with top advisers including Kudlow, believe that he can index capital gains to inflation without Congress, a move that would cut taxes for investors. White House officials are looking at using an executive order to direct the Treasury Department to issue regulations adjusting the original purchase price of an asset -- such as a stock or real estate -- upward with inflation, minimizing the “gain” on which an investor is taxed.

Treasury Department officials are skeptical that this can be done without Congress and are concerned it could face legal challenges.

Such an action would also do little to stave off a potential slowdown or curry favor with voters. Indexing capital gains would only expand the economy by about 0.11 per cent in the long-run, according to the Tax Foundation. And very few people outside the top five per cent of earners, according to the Penn Wharton Budget Model, have capital gains income allowing them to to take advantage of the break.

--With assistance from Reade Pickert and Shawn Donnan.