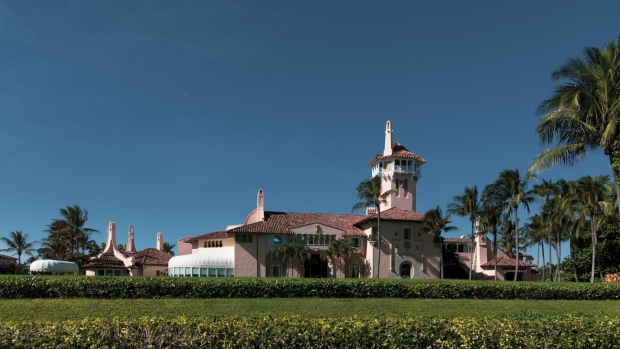 (Bloomberg) -- The search on former President Donald Trump’s home in Florida was unprecedented, but no guarantee that the Justice Department ultimately will bring a criminal case that would be fraught with political landmines and untested legal questions.

Federal investigators on Monday descended on Mar-a-Lago as part of an investigation into whether Trump took classified documents from the White House when he left office, an explosive development that risks hanging over his possible run for the presidency in 2024.

“I am not aware of any prior case where a search warrant was executed at the home of a former president,” said Barbara McQuade, a law professor at the University of Michigan and a former federal prosecutor. “Even President Nixon received a subpoena for his recordings.”

The Federal Bureau of Investigation and Justice Department declined to comment on the raid. Evan Corcoran and John Rowley -- attorneys who are representing Trump in talks with federal prosecutors about Jan. 6, according to a person familiar -- didn’t immediately respond to requests for comment, and neither did Alina Habba, who represents Trump in other cases.

“After working and cooperating with the relevant government agencies, this unannounced raid on my home was not necessary or appropriate,” Trump said in a statement announcing the raid.

While the raid is “uncharted territory” for the US, it isn’t a foregone conclusion that Trump is in serious legal jeopardy, said former federal prosecutor Jennifer Rodgers.

“The bar for charging classified information cases is very high, and a Presidential Records Act criminal violation is unlikely for a variety of reasons having to do with the statutory language of the relevant crimes and the potential penalties,” she said.

Among those penalties is the prospect that any conviction might bar Trump from holding office again.

In a Twitter post, Elias highlighted the portion of the penal code that says those found guilty of the concealment, removal or mutilation of government records shall be “disqualified from holding any office under the United States.” It isn’t clear if that law would apply to a presidential run, but Elias wrote that having to fight in court over that question could be a major barrier to another Trump run.

Even if disqualification from the White House is off the table, a conviction for mishandling government records and classified materials would still carry the possibility of prison time.

The FBI search shows that investigators were able to get a warrant from a federal judge after a finding of probable cause that evidence of a specific crime will be found on the premises, said McQuade. It doesn’t mean that a judge found probable cause to believe that a specific person committed the crime, at this stage of an investigation.

“When the FBI conducts a search, they bring large numbers of agents so that they can search each room in teams and document a chain of custody for every item they seize so that they can testify in court about it later,” she said. Regardless of the specific impetus for the raid, “once the FBI lawfully enters the premises, agents may seize any evidence in plain view.”

It’s not the first time that a criminal investigation has circled Trump. The Justice Department considered whether he obstructed the Mueller investigation into alleged Russian collusion with his campaign, and ultimately decided not to charge him. His eponymous company was charged in New York state court with tax crimes.

It is, however, the first time federal prosecutors have taken the dramatic step of securing a search warrant to raid Trump’s home. The raid -- by an FBI director who Trump appointed to the role -- comes as the former president is preparing to sit for a deposition this month by the New York attorney general, a Democrat who is investigating the Trump Organization’s asset valuations.

Given the high political stakes of investigating a former president, it’s likely that the Mar-a-Lago search warrant “was cleared at the highest levels of DOJ,” said Mary McCord, a former head of the department’s National Security Division now at Georgetown University Law Center.

Kevin McCarthy, the top-ranking Republican in the House, was among several GOP leaders who tweeted out that the raid shows the DOJ is being “weaponized.” He said US Attorney General Merrick Garland should “preserve your documents and clear your calendar” because a Republican-majority House will “conduct immediate oversight” of the DOJ.

The nonprofit Article III Project, which advocates for conservative judges, said presidents have the power to declassify any record they want.

“It’s pretextual legal nonsense for the Biden Justice Department to pretend President Trump broke any criminal statute by taking 15 boxes of his records with him when he left,” the group said in a statement. “Former presidents have government-paid staff and offices, Secret Service protection, security clearances, and secure facilities to store classified records, so there’s no legitimate concern that President Trump’s records could have gotten into the wrong hands.”