U.S. President Donald Trump left the G7 summit on Monday taking a softer tone toward China, just days after spooking financial markets with another escalation in their trade war. Yet amid all the the soothing words, Trump made it clear that he wasn’t abandoning his rough and tumble tactics to force a trade deal on China.

After spending a weekend listening to fellow Group of Seven leaders urging him to ease tensions with China, Trump pointed to recent calls and an amiable speech by China’s top negotiator as signs Beijing wanted a deal. He shrugged off, however, the uncertainty his trade war has caused and showed no signs of backing down in an increasingly bitter trade dispute that’s chipping away at global economic growth and sending world markets tumbling.

“It’s the way I negotiate. It’s done very well for me over the years. And it’s doing even better for the country,” Trump told reporters. Those clamoring for a deal lacked his “guts” and “wisdom,” he added.

While markets seized on Trump’s positive signals Monday, the doubling down on methods that have yielded little progress after more than two years of steady escalation might have been the better one to focus on. On Friday, Trump announced additional tariffs on China in response to Beijing’s plans to retaliate against U.S. goods.

Going into the traditional Labor Day end of the U.S. summer, the prospects of a peaceful resolution to a trade war that has roiled financial markets and helped slow the global economy seem far lower than they were on Memorial Day — and are growing more distant week by week.

“The likelihood of any sort of sustainable deal was already a long-shot a week ago. And now the political terrain on which you could create a deal is just so infinitesimal,” said Jude Blanchette, a China expert at the Center for Strategic and International Studies in Washington.

People familiar with the state of talks say little progress has been made in recent weeks and that any perceived advances Trump sees may have more to do with his mood than what is actually happening. The administration also appears to lack a clear plan over what to do next.

U.S. and Chinese officials have held working-level calls and are due to hold more in the coming days. But China seems reluctant to resume talks focused on what they see as an onerous 150-page draft text that was left behind when talks broke down in May, people briefed on the discussions said.

Both sides have talked about holding face-to-face talks in Washington in September, but China has so far stopped short of committing to those negotiations and some U.S. officials have been reluctant to hold another round if nothing of substance can be achieved.

“Nothing substantive has happened,” said Derek Scissors, a China expert at the American Enterprise Institute who has advised the administration. “They can have as many happy phone calls as they like. But eventually something has to come out of talks.” 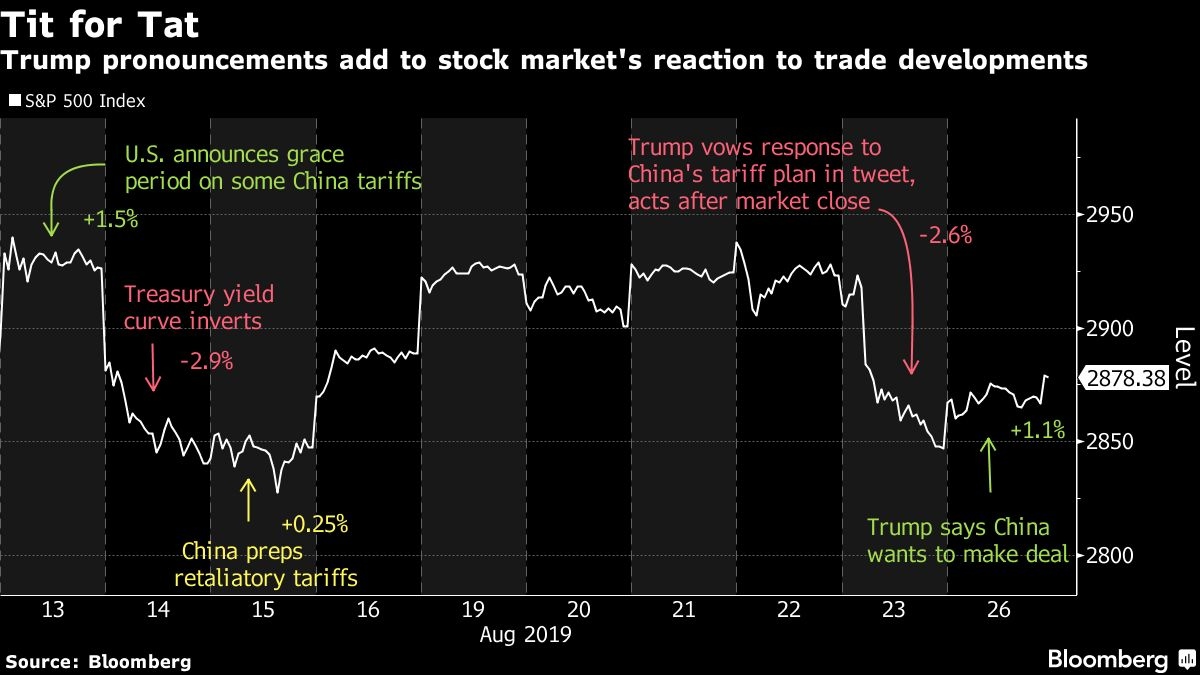 Trump also appears to be misinterpreting the messages coming out of a Chinese leadership that is both facing a political crisis in Hong Kong and growing increasingly frustrated by what they see as an unreliable interlocutor in Trump.

In a news conference Monday, the president focused on what he called a conciliatory message sent by Vice Premier Liu He, the lead Chinese negotiator, in a speech earlier in the day.

Opening the “Smart China Expo” in the western city of Chongqing, Liu said China was “willing to solve the problem through consultation and cooperation with a calm attitude,” according to Chinese media reports. “We firmly oppose the escalation of the trade war,” he added.

People familiar with the matter said Liu’s statement had seemed especially significant to the president. But China experts said it also appeared to be a repetition of boilerplate language used by Chinese officials in recent months as they have publicly called for an end to tariffs and sought to portray themselves as the rational actors in the fight.

“It should have not been interpreted as China giving ground,” said Blanchette.

Worse, said Blanchette, Trump seemed to believe that Liu was the second-highest-ranking official in China, calling him “vice chairman” during his news conference and lauding him as second only to Xi Jinping in the Chinese leadership.

While Liu serves on China’s Politburo and the more important State Council, he is one of four vice premiers under Premier Li Keqiang, who is widely seen as Xi’s de-facto deputy.

Trump’s positive tone Monday came after a concerted charm campaign by his fellow G7 leaders as they urged him to find a peace with China.

BNN Bloomberg commentator Andrew McCreath discusses why he believes the U.S. won't strike a trade deal with China this year. He also gives his outlook for Canadian bank earnings.

“Our deep wish is for an agreement to be found between the United States and China concerning trade because I think that would be something positive for everyone,” French President Emmanuel Macron told reporters, pointing to “lengthy discussions” over China during a meeting on the world economy Sunday.

European G7 leaders met in private ahead of the summit to coordinate their messaging and to make sure they were speaking in one voice. The thinking going in was, according to a German official, that they must try and soften Trump a bit to ensure he would be more responsive to their top concern: the trade war.

One obvious way of doing that was not to hit him hard on the topic. British Prime Minister Boris Johnson, Trump’s new best friend on the world stage, on Saturday raised what he called “faint, sheep-like” objections to the hammering of tariffs and asked the president if he wouldn’t mind “dialing it down a beat.”

But if you listened carefully it wasn’t hard to identify the vast distance between Trump and his fellow G-7 leaders when it came to China.

As Macron stood on the stage with Trump on Monday he offered that neither the U.S. nor China were “economically or industrially naive.” “There has to be a balanced agreement that will be good for everyone,” the French president said.

“‘We’re down on the floor, lower than the floor. We can’t make a 50-50 deal. This has to be a deal that’s better for us,” Trump said. “And if it’s not better, let’s not do business together. I don’t want to do business.”

--With assistance from Nancy Moran, Flavia Krause-Jackson and Saleha Mohsin