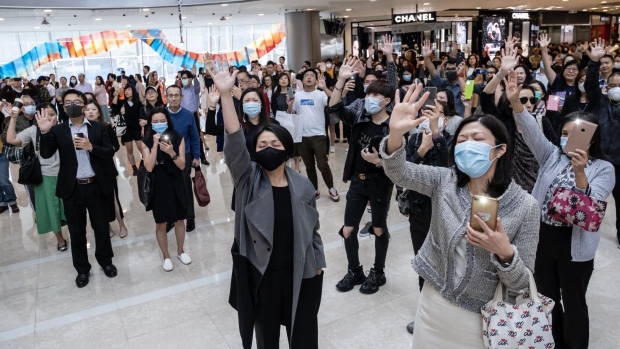 Demonstrators raise their hands during a lunch time flash mob protest at the International Finance Center (IFC) Mall in the Central district of Hong Kong, China, on Tuesday, Nov. 26, 2019. , Bloomberg

Donald Trump signed a bill into law that expresses U.S. support for Hong Kong protesters, a move that will strain relations with China and further complicate the president’s effort to wind down his trade war with Beijing.

Trump signed the measure on Wednesday, the White House said in a statement. Even so, he signaled concerns with unspecified portions of the new law, saying they risked interfering with his constitutional authority to carry out American foreign policy.

The legislation in support of the protesters requires annual reviews of Hong Kong’s special trade status under American law -- and sanctions against any officials deemed responsible for human rights abuses or undermining the city’s autonomy.

“I signed these bills out of respect for President Xi, China, and the people of Hong Kong,” the president said in a statement Wednesday. “They are being enacted in the hope that leaders and representatives of China and Hong Kong will be able to amicably settle their differences leading to long term peace and prosperity for all.”

The House cleared the bill 417-1 on Nov. 20 after the Senate passed it without opposition -- veto-proof majorities that left Trump with little choice but to acquiesce.

Senator Marco Rubio, a Florida Republican, said the law, S. 1838, would give the U.S. “meaningful tools to deter further influence and interference from Beijing into Hong Kong’s internal affairs.”

“In an overwhelming display of bipartisan unity, Congress passed our Hong Kong Human Rights and Democracy Act, and I applaud President Trump for signing this critical legislation into law,” Rubio said in a statement. “I look forward to continuing to work with the administration to implement this law.”

Trump also signed a second Hong Kong bill, S. 2710, that bans the export of crowd-control items such as tear gas and rubber bullets to the city’s police.

While many members of Congress in both parties had voiced strong support for the protesters who are demanding greater autonomy for the city, Trump stayed largely silent, even as the demonstrations have been met by rising police violence.

Last week, Senate Majority Leader Mitch McConnell, a Kentucky Republican, called on the president to speak out, saying that “the world should hear from him directly that the United States stands with” the protesters.

China’s foreign ministry had urged Trump to prevent the legislation from becoming law, warning the Americans not to underestimate China’s determination to defend its “sovereignty, security and development interests.”

“If the U.S. insists on going down this wrong path, China will take strong countermeasures,” ministry spokesman Geng Shuang said at a briefing Thursday in Beijing. Chinese Vice Foreign Minister Zheng Zeguang summoned the U.S. ambassador, Terry Branstad, on Monday to express “strong opposition” to what the country’s government considers American interference in the protests, including the legislation, according to statement.

The new law comes just as Washington and Beijing have shown signs of working toward what the White House calls a “phase one” deal to ease the trade war. Trump would like the agreement finished in order to ease economic uncertainty for his re-election campaign in 2020, and he has floated the possibility of signing the deal in a farm state as an acknowledgment of the constituency that’s borne the brunt of retaliatory Chinese tariffs.

U.S. and Chinese trade negotiators will continue communicating closely and work toward a phase one deal, Ministry of Commerce spokesman Gao Feng said at a briefing in Beijing on Thursday.

Before a speech at the Bloomberg New Economy Forum in Beijing last week, China’s Vice Premier Liu He -- the country’s chief trade negotiator -- said that he was “cautiously optimistic” about reaching the phase one accord, according to people who attended a dinner and asked not to be identified.