President Donald Trump signed off on a phase-one trade deal with China, averting the Dec. 15 introduction of a new wave of U.S. tariffs on about US$160 billion of consumer goods from the Asian nation, according to people familiar with the matter.

The deal presented to Trump by trade advisers Thursday included a promise by the Chinese to buy more U.S. agricultural goods, according to the people. Officials also discussed possible reductions of existing duties on Chinese products, they said. The terms have been agreed but the legal text has not yet been finalized, the people said. A White House spokesperson declined to comment.

An announcement is expected Friday Washington time, according to people familiar with the plans.

Global stocks hit a record high for the first time since early 2018 and bond yields climbed on optimism over trade. On Thursday, Trump tweeted that the U.S. and China are “VERY close” to signing a “BIG” trade deal, also sending equities higher. The yuan surged the most in a year, rising above 7 per dollar.

Getting VERY close to a BIG DEAL with China. They want it, and so do we!

“They want it, and so do we!” he tweeted five minutes after equity markets opened in New York, sending stocks to new records.

The administration has reached out to allies on Capitol Hill and in the business community to issue statements of support once the announcement is made, people said. Before meeting his trade advisers, Trump engaged with members of the Business Roundtable, which represents some of the largest U.S. companies, they said.

Trump changed his mind on deals with China before. Negotiators have been working on the terms of the phase-one deal for months after the president announced in October that the two nations had reached an agreement that could be put on paper within weeks.

The U.S. has added a 25 per cent duty on about US$250 billion of Chinese products and a 15 per cent levy on another US$110 billion of its imports over the course of a roughly 20-month trade war. Discussions now are focused on reducing those rates by as much as half, as part of the interim agreement Trump announced almost nine weeks ago.

In addition to a significant increase in Chinese agricultural purchases in exchange for tariff relief, officials have also said a phase-one pact would include Chinese commitments to do more to stop intellectual-property theft and an agreement by both sides not to manipulate their currencies.

Put off for later discussions are knotty issues such as longstanding U.S. complaints over the vast web of subsidies ranging from cheap electricity to low-cost loans that China has used to build its industrial might. 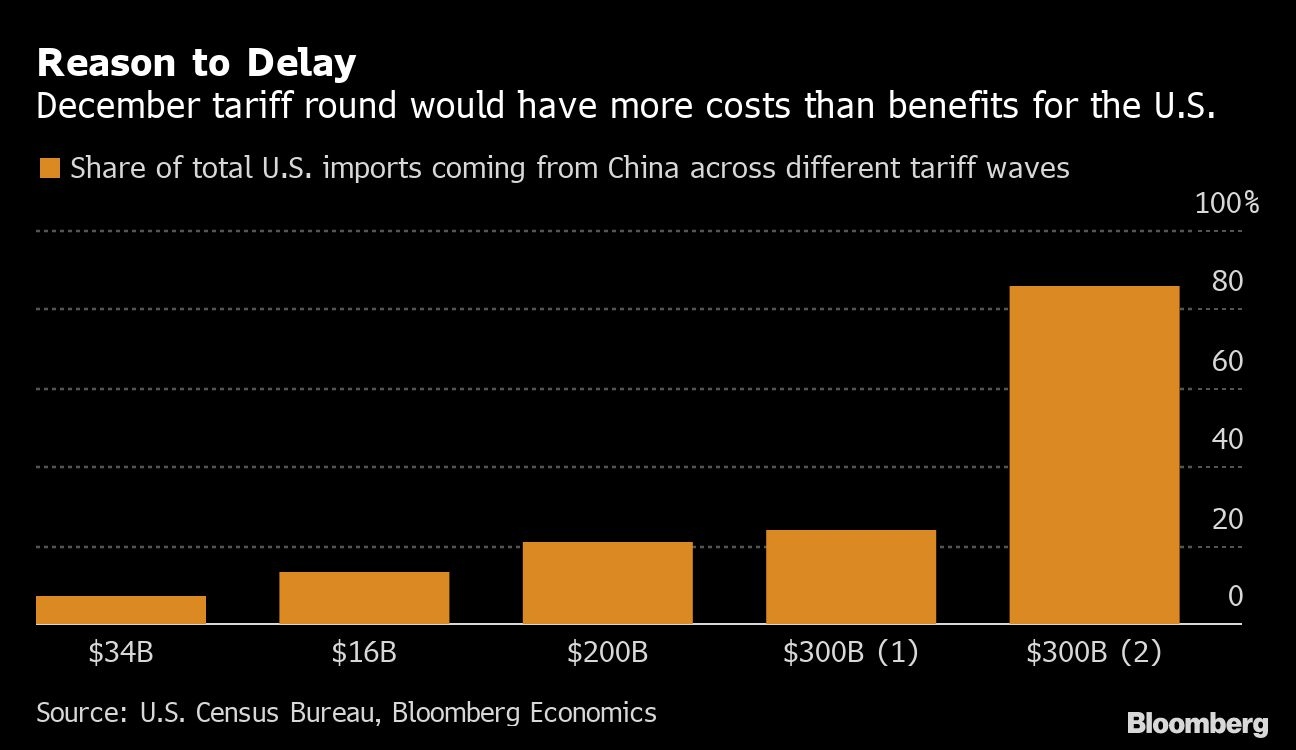 The new duties, which were scheduled to take effect at 12:01 a.m. Washington time on Sunday unless the administration says otherwise, would hit consumer goods from China including smartphones and toys.

Even amid the positive signs on trade, Chinese foreign minister Wang Yi highlighted the other confrontations between the two sides. On Friday in Beijing, Wang said that U.S. actions had “severely damaged the hard-earned basis for mutual trust” and left the relationship in their “most complex” state since the two sides established ties four decades ago.

Before today, Trump’s advisers had sent conflicting signals and stressed that he hadn’t made up his mind on the next steps.

The decisions facing Trump over a trade deal highlight one dilemma he confronts going into the 2020 election: Whether to bet on an escalation of hostilities with China and the tariffs he is so fond of or to follow the advice of more market-oriented advisers and business leaders who argue a pause in the escalation would help a slowing U.S. economy bounce back in an election year.

“The outcome of U.S.-China trade talks will be a key determinant of the trajectory for 2020 growth. At one extreme, a deal that takes tariffs back to May 2019 levels, and provides certainty that the truce will hold, could deliver a 0.6 per cent boost to global GDP. At the other, a breakdown in talks would mean the trade drag extends into the year ahead.”
--Tom Orlik, chief economist

The president’s expected announcement on Thursday was met with immediate criticism from Democrats and even by members of his own party. Republican Senator Marco Rubio, one of the most vocal China hawks in Congress, said the White House should consider the risks of a deal.

.@WhiteHouse should consider the risk that a near-term deal with #China would give away the tariff leverage needed for a broader agreement on the issues that matter the most such as sub­sidies to do­mes­tic firms,forced tech transfers & blocking U.S. firms access to key sectors

A near-term pact “would give away the tariff leverage needed for a broader agreement on the issues that matter the most such as sub­sidies to do­mes­tic firms, forced tech transfers & blocking U.S. firms access to key sectors,” he said in a tweet.

Democratic lawmakers in a letter on Thursday told the president this point in the negotiations marks a “critical juncture” for the U.S. to secure concessions “on major structural challenges that will only become more difficult to address.”

“Your administration must stay strong against the Chinese government if fundamental concessions are not made. Anything short of a meaningful, enforceable and lasting agreement would be severe and unacceptable for the American people,” Senators Chuck Schumer, Ron Wyden and Sherrod Brown said.

--With assistance from Justin Sink, Vince Golle and Josh Wingrove.