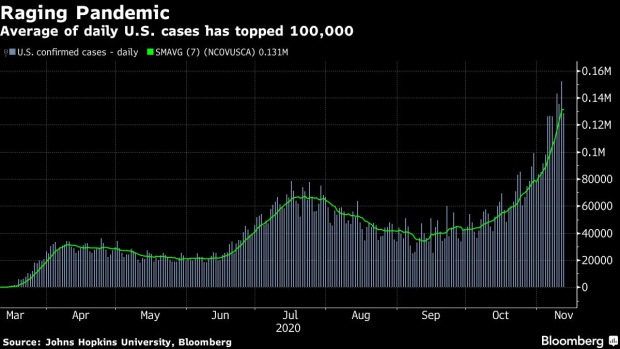 Medical staff members wear protective gear while working at the COVID-19 Intensive Care Unit (ICU) of United Memorial Medical Center in Houston, Texas, U.S., on Sunday, Nov. 8, 2020. Close to 10 million Americans have been diagnosed with Covid-19 in the past 10 months, and with the start of winter just a month away, and the public increasingly likely to spend more time cooped up inside, the virus shows few signs of slowing down. Photographer: Go Nakamura/Bloomberg , Bloomberg

(Bloomberg) -- President Donald Trump has stayed silent as the U.S. coronavirus outbreak rages anew, a leadership vacuum that leaves governors and health authorities to grapple with record numbers of new cases and hospitalizations.

Trump hasn’t spoken publicly in a week, as the virus surges across the country and sets records for hospitalizations and daily new cases. He’ll receive a briefing Friday on vaccine development, but has otherwise focused his public comments this week on circulating debunked allegations of voter fraud and criticizing Fox News on Twitter.

The president could help by asking Americans directly to wear masks, encouraging Republican governors to do more to slow the spread, publicly backing health officials or even directing his staff to jointly coordinate with President-elect Joe Biden’s transition team, to ensure a smooth handoff, health experts say. Trump has instead been absent. He’s discouraged masks and social distancing and is blocking the start of Biden’s transition while refusing to concede defeat, compounding the federal inaction.

“I find it really just unbelievable that the federal government has just thrown in the towel on this and is doing nothing,” said Ashish Jha, dean of the Brown School of Public Health. He expects Biden to inherit an even more dire picture.

“We are in the worst shape that we have been in, in the pandemic. Things are awful and they are going to get much, much worse,” he said.

The US recorded 145,000 cases on Thursday, second only to the 152,000 a day earlier, roughly double the figures from just two weeks earlier. Deaths have been trending upward as well with nearly 2,000 on Wednesday alone.

Data show the virus surging across the entire country, in both cities and smaller towns and in virtually every state. About 65,000 Americans are currently hospitalized from the virus, according to the Covid Tracking Project, another record. The situation is likely to worsen, fueled by cold weather and Thanksgiving gatherings, public health experts say.

Larry Hogan, Maryland’s Republican governor and a Trump critic, said the states last had a call with the White House coronavirus task force on Nov. 2.

“It’s one of the things I’m frustrated about,” Hogan said Thursday. “The states are out here fighting probably the worst part of the crisis we’ve ever had to deal with and we don’t really know what’s going on at the federal level and we don’t see any action out of Congress either.”

A call with governors is scheduled for next week, according to a person familiar with the matter.

Lori Tremmel Freeman, chief executive officer of the National Association of County and City Health Officials, said the lack of a coordinated response between the federal and lower-level governments has dogged the country’s coronavirus response, as has the politicization of public health measures.

“The disease could care less about who is president of the United States. The disease is still spreading,” she said. ”It’s exciting that there’ll be another administration to give a go at this, but we really need a lot of coordinating to occur even between the two administrations so we don’t lose anything positive that has been done.”

The resurgence has erupted as some states lifted restrictions on social life and as the virus reached smaller communities that hadn’t been heavily affected, and where public health precautions weren’t as stringent. Some states are now reimposing restrictions, while Chicago’s mayor, Lori Lightfoot, imposed a stay-at-home order. Health organizations are sounding the alarm and calling for more widespread mask-wearing, among other measures.

Vice President Mike Pence met with the coronavirus task force on Monday for the first time in nearly three weeks, but Trump did not attend and it’s been months since he has. He has also gone months without appearing with the government’s most trusted health officials, such as Anthony Fauci and Deborah Birx, and has instead elevated another adviser, Scott Atlas, who has downplayed the virus’s risk and criticized calls to wear masks and take other preventive measures.

Trump has routinely downplayed case totals, saying, falsely, that they’re simply a reflection of the U.S. conducting more testing. He has pointed to his own recovery from Covid-19 as evidence that anyone who falls ill can get better.

To slow the spread, Trump “would need to, first, identify it as a problem, and a serious problem, and not something to make fun of and ridicule,” said Michael Mina, an assistant professor and epidemiologist at the Harvard T. H. Chan School of Public Health.

He said Trump should urge his supporters to take steps to protect themselves, while facilitating a wide-scale at-home testing system that people would be more likely to use. Instead, the U.S. has wasted time, politicized the pandemic and patience is running out.

“Unfortunately, we painted ourself into a corner where we have truly no good choices,” Mina said. “It’s like we’re living in a dystopian world -- we’re practically having a weird civil war right now with a virus in the middle of it.”

The White House issued a written statement Thursday when asked about the surge in cases.

The virus has spread widely even in Trump’s orbit. His wife, Melania, and his youngest son, Barron, were infected about the same time he was, in early October. More recently, a number of prominent Republicans tested positive for infection after attending a crowded election night party at the White House, including Trump’s Chief of Staff Mark Meadows, Housing and Urban Development Secretary Ben Carson, campaign adviser David Bossie, longtime adviser Corey Lewandowski and Republican lobbyist Jeff Miller.

Republican National Committee Chief of Staff Richard Walters also tested positive this week, though he did not attend the Nov. 3 party, where about 200 Trump friends, donors and allies mingled largely without masks or any social distancing.

The president’s approach toward the virus is unchanged since before he lost re-election. He has pressed the scientific community to rapidly develop treatments and vaccines, and the Food and Drug Administration to approve them, while typically refusing to model good public health behavior such as wearing a mask.

Biden unveiled his own coronavirus advisory board on Monday, and pleaded with Americans to wear a mask. Beyond that bully pulpit, there’s little he can do before his Jan. 20 inauguration.

Absent a vaccine, the virus’s spread might be much worse by then, fueled by family holiday gatherings and colder winter weather that drives people indoors. Jha said the U.S. is on pace to endure another 100,000 coronavirus deaths before the inauguration.

“I fear that by the time he gets in on Jan. 20 that basically all hell will have broken loose in the United States,” said Lawrence Gostin, a professor at Georgetown Law who specializes in health law. “It’s going to be an epidemic that’s out of control and nobody should expect even a science-based administration, which he will be, to bring this under control anytime soon.”

Gostin said that Biden has “got a huge uphill battle” when it comes to the coronavirus. “It’s no longer possible to just test and trace your way out of this epidemic in the United States, because it’s just too widespread.”

The mixed messaging and patchwork response has left the U.S. in a difficult position, Harvard’s Mina said. There are options, though nothing that will stop the exponential spread tomorrow, he said.

“I never once saw a strategy throughout this entire pandemic,” he said. “And it’s not too late to start.”