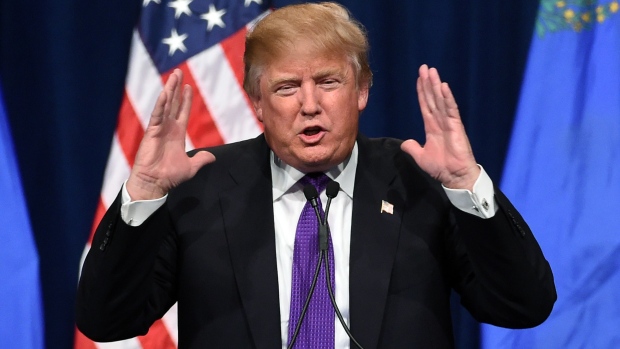 “General Motors, which was once the Giant of Detroit, is now one of the smallest auto manufacturers there,” Trump tweeted Friday, a day after Bloomberg News reported GM employed fewer United Auto Workers-represented employees than Ford Motor Co. or Fiat Chrysler Automobiles NV. The president called for GM to “start moving back to America again.”

GM has about 46,000 UAW workers, about 2,000 fewer than it had in 2009, when the company emerged from a bankruptcy reorganization backed by the U.S. government. The automaker trails Ford by about 9,000 union-represented employees and Fiat Chrysler Automobiles NV by roughly 1,200, according to headcounts provided by the companies.

GM has announced more than $23 billion of investments in U.S. manufacturing operations over the last decade, which it says is more than one-fourth of the industry’s total in that span.

By calling attention to GM’s manufacturing presence, Trump has added to the pressure the company will be under at the bargaining table later this year. GM, Ford and Fiat Chrysler are negotiating new four-year labor contracts with the UAW, and union leaders have vowed a take-no-prisoners approach to talks amid an embarrassing corruption scandal.

In his tweet, Trump claimed GM had moved major plants to China before he became president, which is incorrect. While GM has added several factories in China over the last decade, the company has expanded its manufacturing base there almost entirely to produce for that market.

General Motors, which was once the Giant of Detroit, is now one of the smallest auto manufacturers there. They moved major plants to China, BEFORE I CAME INTO OFFICE. This was done despite the saving help given them by the USA. Now they should start moving back to America again?

GM’s expansion in Mexico has been a greater culprit behind its stagnant U.S. manufacturing headcount. The UAW attacked the company’s decision to build the new Chevrolet Blazer in Mexico starting last year, and production of that model helped GM overtake Japan’s Nissan Motor Co. as Mexico’s top carmaker.

Fiat Chrysler, by contrast, has more than doubled its union-represented U.S. workforce since 2009 and plans to keep hiring. The company announced in February it will invest $4.5 billion to produce new Jeep sport utility vehicles and boost Ram truck output at plants in or near Detroit, creating almost 6,500 jobs.