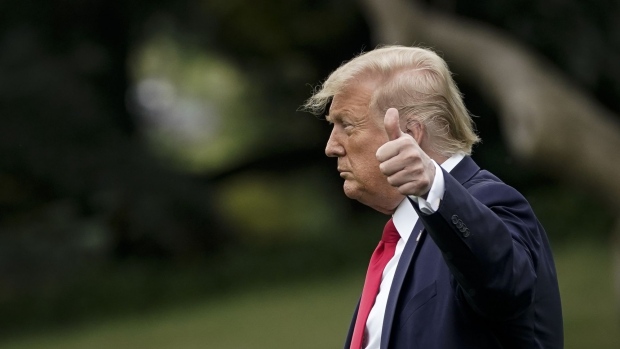 Orlando’s Benessere Capital Acquisition Corp. reached a deal that will see investors in Miami-based eCombustible receive US$805 million of stock, it said in a regulatory filing Wednesday, confirming an earlier Bloomberg News report.

The hydrogen firm’s backers may receive as many as 59 million additional Bennessere shares depending on its stock-price performance over the next two and a half years, according to the statement. The combined company, to be called eCombustible Energy Corp., is expected to trade on the Nasdaq Capital Market under the ECEC ticker.

Orlando runs several SPACs including Digital World Acquisition Corp., which agreed in October to merge with Trump’s nascent media venture in a deal valued at as much as US$1.7 billion. Another blank-check company led by Orlando -- Wuhan, China-based Yunhong International Co. -- is liquidating after failing to find an acquisition target.

Shares of Benessere Capital Acquisition soared as much as 40 per cent Wednesday following the deal news. They were up 9.4 per cent to US$11.13 at 11:09 a.m. in New York.

ECombustible has been developing a hydrogen-based alternative fuel that can be used in thermal industrial applications, according to Wednesday’s statement. The company’s technology has been validated through independent assessments by “third-party engineering firms and other experts,” it said, without naming them or elaborating further.

Jorge Arevalo, a former real estate investor and hotelier, founded the company about a decade ago. Arevalo says a realization of the power required to support those property developments, and a study of Nobel laureate Irving Langmuir’s research on clean energy, inspired him to start ECombustible, according to his LinkedIn profile.

Benessere Capital Acquisition, which is sponsored by ARC Global Investments LLC, raised US$115 million in a January initial public offering. At the time, the SPAC said it would focus on dealmaking with technology-focused middle-market and emerging-growth companies in North, Central and South America.

Interest in hydrogen is surging, with many governments and businesses betting on it as the “clean molecule” of the future. Still, creating a hydrogen economy won’t be easy, as the multitude of companies in the space need to prove their technologies can be commercialized and work on the large scale needed for success.

Hydrogen holds the promise of decarbonizing industries that can’t easily run on electricity, serving as both a fuel and a way to store energy. When fed through a fuel cell or burned in a turbine, hydrogen can generate electricity without greenhouse gas emissions.

While nearly all the hydrogen produced today comes from natural gas, it can also be stripped from water using renewable power -- with no carbon emitted. The first generation of such “green hydrogen” plants is now under construction, due to come online in the next few years. It could potentially power cement and steel factories, cargo ships and airplanes alike.