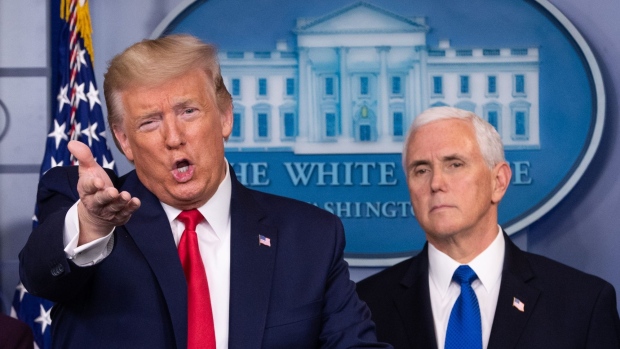 Hardly a day goes by right now without business groups calling on the White House to suspend tariffs on Chinese goods in an effort to help them stem the growing challenges faced by the coronavirus outbreak.

On Wednesday morning, Americans for Free Trade, a group of more than 160 business associations urged Trump to consider relief from duties as one of the emergency measures his administration is rolling out. “These tariffs are taxes that Americans pay,” the group said in a letter.

“There’s no reason to do that. China is paying us billions and billions of dollars in tariffs,” Trump said in a news conference. “I can’t imagine Americans asking for that.”

Over the course of his presidency, Trump has imposed tariffs on a total of more than US$400 billion in goods, ranging from Chinese apparel imports and French cheeses to European aircraft. Economists say those duties are either absorbed by companies or added to the price tag for U.S. consumers, meaning they’re not paid by China as the White House often claims.

Trump didn’t rule out, however, that China might request relief. “It could be that China asks for a suspension or something. We’ll see what happens,” he added.

Complicating the matter, is that many of the same small- and medium-size enterprises such as retailers or manufacturers that were hurt by the president’s tariff battles are also now suffering from the economic fallout of the coronavirus.

Business representatives admit it’s not clear that targeted tariff cuts would have a significant impact on the broader economic outlook but eliminating their levies certainly wouldn’t hurt, they said.

Behind the scenes, the discussion about tariff relief has for weeks caused heated debates among Trump administration officials as well as outside allies, including lawmakers.

Larry Kudlow, the White House economic adviser, has been among the most vocal aides to make the case for relief, people familiar with the internal deliberations said.

Other aides have argued that cutting tariffs would only lead to a bigger trade deficit – an important metric for Trump in his reelection campaign.

A White House spokesman denied that Kudlow was making the case for tariff relief.

Dan DiMicco, former CEO of Nucor Corp., who helped craft many of the White House initiatives on trade, said talk about cutting tariffs isn’t founded in real need and he’s expressed that to the administration.

“This is just another cheap shot to try and undo what is absolutely necessary for dealing with trade cheats,” DiMicco said. “Steel and aluminum tariffs is hardly a serious issue for the economy, but it is for national security.”

The American Iron and Steel Institute on Tuesday also warned of the potential negative consequences from tariff cuts.

“The coronavirus epidemic is exacerbating the global glut in steel production and threatens to unleash a new surge in imports into the United States, which would be devastating to the American steel industry and our national security,” the group wrote to lawmakers.

Despite their reluctance to cut tariffs across the board, the administration has moved quickly to exempt a range of products that are essential to the coronavirus response in the U.S.

The Office of the U.S. Trade Representative in recent weeks has granted exclusions for face masks, gloves and other medical supplies that are solely sourced in China.

Still, rhetoric has become more hostile between the U.S. and China recently.

Trump has shifted from praising Chinese President Xi Jinping for his prompt containment of the virus, to blaming the world’s second-largest economy for spreading the disease, which he now calls the “Chinese virus.”

When asked Wednesday whether his comments could incite racist attacks against Chinese-Americans, Trump clarified that he’s fighting back against Chinese claims that American soldiers were responsible for bringing the virus to China.

And on Tuesday, the White House National Security Council responded to China’s retaliatory move to expel American journalists from the country and Hong Kong. It urged China to refocus its efforts from punishing the free press to joining the world in fighting the growing public health crisis.