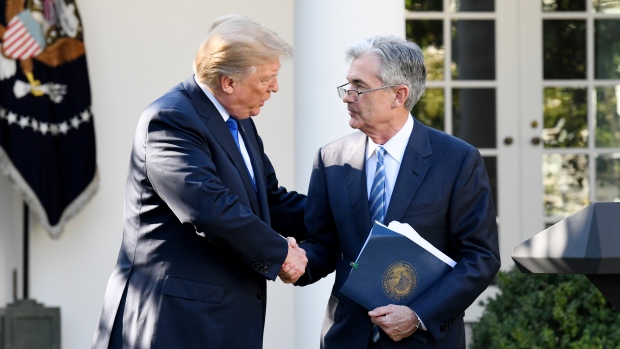 U.S. President Donald Trump shakes hands with Jerome Powell, governor of the U.S. Federal Reserve and Trump's nominee as chairman of the Federal Reserve, right, during a nomination announcement in the Rose Garden of the White House in Washington, D.C., U.S., on Thursday, Nov. 2, 2017. , Bloomberg

“I put a man in there who I like and respect,” Trump said Thursday in an interview with Bloomberg News in the Oval Office.

Trump said at a private Republican fundraiser earlier this month that he had expected Powell to favor low interest rates. On Twitter and in interviews, the president has criticized recent interest rate hikes, saying he is “not thrilled” with monetary tightening.

Trump also says the Fed should help him in his trade disputes with China, the EU and other nations, asserting that other central banks are assisting their countries. His comments break with more than two decades of precedent that presidents avoid commenting on monetary policy out of respect for the Fed’s independence.

“We are not being accommodated,” he said Thursday. “I don’t like that.”

“That being said,” he continued, “I’m not sure the currency should be controlled by a politician.”

The Fed has raised rates five times since Trump took office, including twice this year under Powell. It has penciled in two more increases this year as it seeks to normalize monetary policy after the global financial crisis that peaked about a decade ago. The Fed has justified a cautious approach toward increasing rates by pointing to sluggish inflation, which has shown few signs of jumping significantly past the Fed’s 2 percent target.

As a presidential candidate, Trump denounced the Fed’s promotion of low rates as creating a “big, fat, juicy bubble,” saying that then-Fed Chair Janet Yellen should be “ashamed” of wanting to bolster the Obama administration’s legacy.

Trump considered re-appointing Yellen for a second term but ultimately chose Powell, who has charted a similar monetary policy.

Though Trump has expressed displeasure with Powell, he doesn’t have the power to fire a Fed chairman. The president appoints members to the Board of Governors in Washington -- including the Fed chairman -- and can only fire governors “for cause.” The Senate must sign off on replacements.