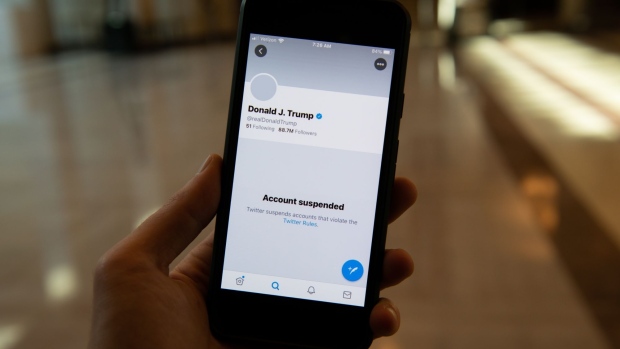 The suspended Twitter Inc. account of U.S. President Donald Trump on a smartphone arranged in Washington, D.C., U.S., on Saturday, Jan. 9, 2021. Twitter permanently banned Trump's personal account on Friday for breaking its rules against glorifying violence, marking the most high-profile punishment the social-media company has ever imposed and the end of Trump's relationship with his favorite social media megaphone. Photographer: Graeme Sloan/Bloomberg , Bloomberg

(Bloomberg) -- Former President Donald Trump will continue to suffer “irreparable harm” from being kicked off Twitter Inc. and Facebook Inc. even after his new social-media platform launches to challenge the companies, his lawyer said.

The injunctions Trump is seeking against Twitter and Facebook are still justified because Trump’s new platform, Truth Social, won’t launch until the first quarter of 2022 and will remain smaller than the Big Tech giants for some time, his lawyer John P. Coale said in a phone interview Thursday.

“Most of the harm was done while he was still president, so I don’t think this undermines his case,” Coale said. “He does have a duty to mitigate damages and this could be him mitigating damages caused to him.”

Trump, who sued Twitter, Facebook and Google’s YouTube for blocking him after the Jan. 6 Capitol riot, is seeking court orders forcing them to reinstate his accounts while his lawsuits proceed. The platforms say Trump violated their terms of service by inciting violence.

Trump’s Oct. 1 filing seeking an injunction against Twitter said the company is an “essential platform for communicating in today’s global environment” and a “premier destination for users seeking information.” Without access, Trump said, he “faces loss of his donor and merchandising platforms, and ability to communicate his views, content, and endorsements.”

“The continuing irreparable harm to plaintiff, absent an injunction, is indisputable,” he said.

Trump announced his plans for Truth Social a few weeks later, highlighting his ability to reach millions of supporters and voters without Twitter or Facebook while standing up to the “tyranny of Big Tech.” Coale said Trump has a “unique ability” to respond to being kicked off social media.

“I don’t think ‘Joe Blow’ can go out there and create a new company,” Coale said. “Lots of other people were harmed.”