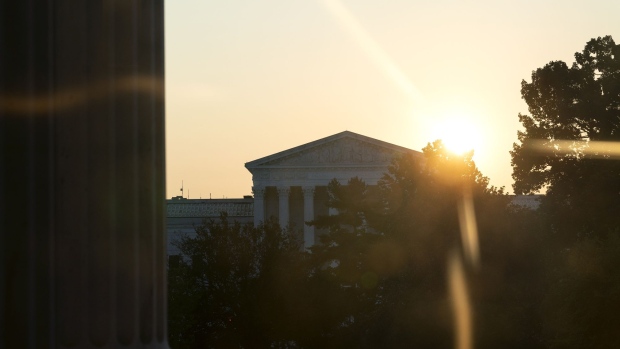 The sun rises behind the U.S. Supreme Court before a ceremony for late Supreme Court Justice Ruth Bader Ginsburg in Washington, D.C. on Sept. 23. , Bloomberg

(Bloomberg) -- Senate Republicans are developing plans to begin confirmation hearings around Oct. 12 for President Donald Trump’s pick to replace the late Justice Ruth Bader Ginsburg on the Supreme Court, setting up a bitter partisan fight over the nomination before the November election.

The plan could lead to a final vote by the full Senate by the week of Oct. 26, according to people familiar with the process. But Democrats, who say Ginsburg’s seat should be determined by the winner of the November presidential election, could use procedural maneuvers to delay the process.

“Nothing official has been announced yet,” said Taylor Reidy, a spokeswoman for the Senate Judiciary Committee.

Trump has said he will announce his nominee on Saturday. The president is currently leaning toward choosing Amy Coney Barrett, a judge on the Seventh Circuit Court of Appeals and favorite of religious conservatives, people familiar with the process have said.

The committee hearings could begin as soon as Oct. 8, but it’s more likely they will begin Oct. 12, two of the people familiar with the plans said.

Before the nomination fight kicks off, Trump plans to visit the Supreme Court on Thursday to “pay his respects” to Ginsburg, the White House said.

Ginsburg is lying in repose at the high court on Wednesday and Thursday, allowing the public to view her casket under the court’s front portico. On Friday, the pioneering justice will become the first woman ever to lie in state at the U.S. Capitol.