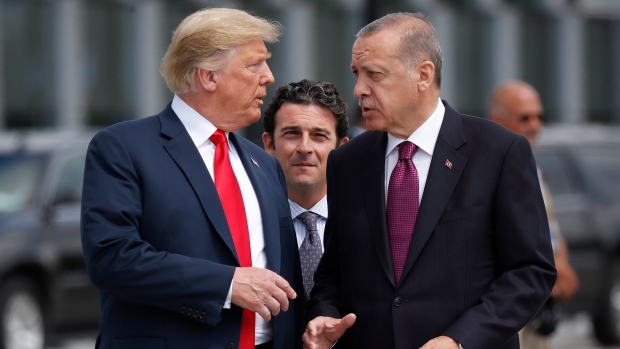 In this Wednesday, July 11, 2018, file photo, President Donald Trump, left, talks with Turkey's President Recep Tayyip Erdogan, as they arrive together for a family photo at a summit of heads of state and government at NATO headquarters in Brussels. , The Canadian Press

President Donald Trump gave his administration power to impose new sanctions on Turkey but isn’t moving ahead with them yet, Treasury Secretary Steven Mnuchin said.

“We are putting financial institutions on notice that they should be careful and that there could be sanctions,” Mnuchin said Friday in the White House briefing room. “These are very powerful sanctions, we hope we don’t have to use them, but we can shut down the Turkish economy if we need to.”

The move comes as Trump defends his decision to pull back some U.S. forces in northern Syria, which cleared the way for Turkey to send its forces into the country and attack American-allied Kurdish militias.

Trump has come under sharp criticism from Republican lawmakers, including Senator Lindsey Graham of South Carolina, for stepping back from the Kurds. Graham called Trump’s decision to pull troops out of northern Syria the “biggest blunder of his presidency.”

“It is a situation that we’re all concerned about,” Mnuchin said. He said he wasn’t aware of any change in plans for Turkey’s president, Recep Tayyip Erdogan, to visit the White House in November.

Trump is signing an executive order allowing the U.S. to sanction individuals and entities in Turkey involved in human rights “abuses or actions leading to the further deterioration of peace, security, and stability in northeastern Syria,” according to the Treasury Department.

Turkey’s cross-border military offensive has resulted in the deaths of hundreds of “terrorists” since it began on Wednesday, according to Turkey’s military.

Trump defended his decision on withdrawing troops by saying the U.S. can’t afford to be stuck in “ridiculous endless wars.”

Specialists on sanctions said the administration already had the power to sanction Turkey and that the Friday announcement appeared to be a publicity stunt.

“It’s only after Congress ordered the administration to put sanctions on Turkey they’ve put in place a more specific mechanism to do so,” said Daniel Tannebaum, a partner at Oliver Wyman in New York.